Today's #SundaySupper is all about retro foods — dishes that were popular in the 50s, 60s and 70s. Bananas foster is a classic 1950s dessert, with sautéed bananas, caramel rum sauce and vanilla ice cream.

Today, the Sunday Supper group is traveling back in time to celebrate dishes popular in the 1950s, 60s, and 70s. Yes, we're going retro!

I decided on a very classic 50s dish, bananas foster. It was created in 1951 by Paul Blangé at Brennan's Restaurant in New Orleans. It was named for the chairman of the New Orleans Crime Commission, Richard Foster, who was a friend of the restaurant's founder.

In this dish, Bananas are sauteed in butter and sugar until a caramel sauce forms, then rum is added and set aflame. Don't worry, thanks to the croissant disaster of 2007, I have a fire extinguisher. 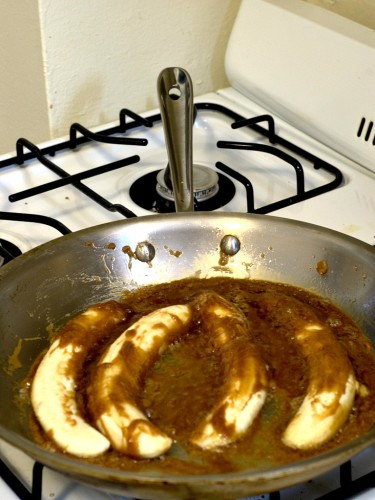 It's a relatively simple dish, with few ingredients, and no difficult techniques. If you don't have banana liqueur, you can simply leave it out of the recipe. But I just told you how to make it at home, so now you have no excuse.

The initial flame when you light the pan is impressive. It settles down, then takes about 30 seconds to burn itself out. It's actually the vapor from the rum that is flammable, not the rum itself. Be sure to take the skillet off of the burner before adding the rum, and keep a pot lid and/or fire extinguisher handy for safety. 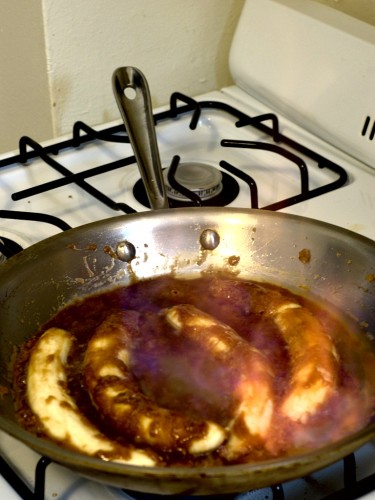 Adapted from The Restaurant School at Walnut Hill College

Don't forget to check out these other Sunday Supper Retro recipes!

Made in the Shade Main Dishes: