Creamy peanut butter cheesecake is layered over an Oreo crust and topped with rich nutella ganache! 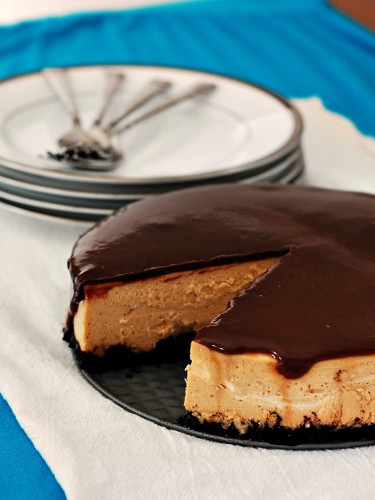 I love cheesecake. Can you tell? If I had to pick something to call my "signature dish," it'd be cheesecake.

So when Carla over at Chocolate Moosey told me about a blog event called Cheesecake Day hosted by Roxana of Roxana's Home Baking, I jumped to sign up.

I had a heck of a time trying to choose a cheesecake recipe to make. Should I go chocolate-y? Fruity? Then, we spent Father's Day at one of our favorite Philly restaurants, Catahoula, and they had a fabulous peanut butter cheesecake on the dessert menu. I had to recreate that cheesecake at home. 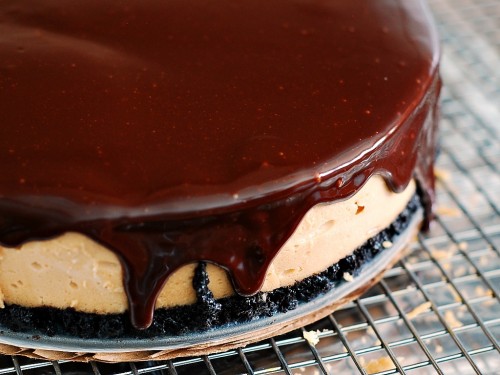 The question I see most often regarding cheesecakes is how to prevent it from cracking. First, ensure all of your ingredients (not just the cream cheese) are at room temperature. This ensures that they will blend together well. And secondly, even if the recipe you're following doesn't include it, use a water bath.

What is a water bath, and what does it do for cheesecake? To make a water bath, you place your springform pan inside a larger baking pan, and pour boiling water into the larger pan before placing the whole setup in the oven.

Why go to the extra trouble? First, cheesecakes are thickened with eggs. Eggs set (cook) at a much lower temperature than most other baking ingredients. Cheesecakes start off baking at a high temperature to set the cake, then finishing "low and slow" (at a low temperature for a long time). If the egg proteins cook too quickly, they will tighten up and shrink, causing your cheesecake to crack. The water bath acts as insulation, keeping the batter from overheating and cooking the egg proteins too quickly. 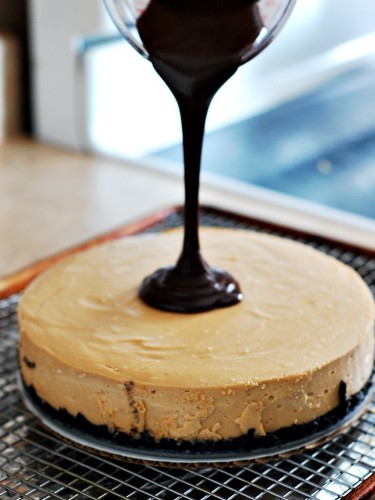 One final trick to preventing cracks is to let the cheesecake cool slowly. And definitely use a paring knife to separate the cheesecake from the springform pan before placing it in the refrigerator. The cake will definitely shrink once chilled, and if it's still clinging to the side of the pan, it can crack.

Although, if after all these precautions are taken, and the cheesecake still cracks, I just remember the wise words of a chef at my culinary school: cover the cheesecake with some sort of topping! Whether it's melted chocolate or whipped cream, or fresh fruit, just cover up the crack! No sense in wasting a perfectly tasty, if slightly imperfect, cheesecake.

This cheesecake is just amazing. The cheesecake itself is light and creamy, almost silky, which contrasts with the thick, rich ganache topping. The combination of chocolate and peanut butter and Nutella is one of my favorite flavor combos.

This recipe is definitely getting added to my "Must make again!!" file. 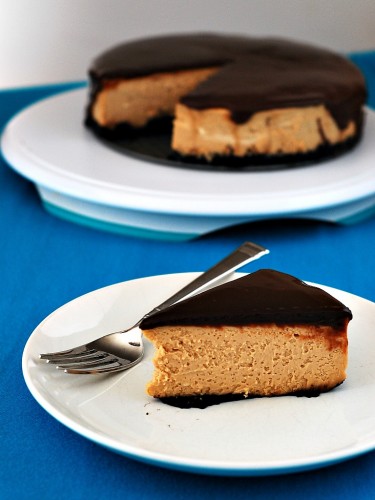 Don't forget to check out the other Cheesecake Day recipes!