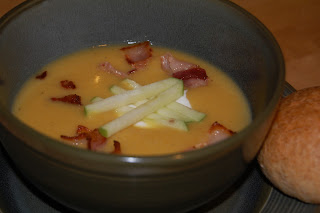 I'm finally starting to get back in the kitchen, in part because my son discovered the joy of afternoon naps, and in part because I discovered something wonderful called the Moby Wrap, which allows me to "wear" my son and still have both hands free to prep vegetables or throw together a marinade. Once the Mister gets home, I can hand the baby to him, and cook the meal.

With winter finally making an appearance in Southeastern Pennsylvania, what better meal to eat than a thick and hearty, yet nutritious soup? This butternut squash apple soup from Epicurious is creamy without actually adding any cream, thanks to the potatoes, so it's easy on the waistline — only 180 calories per serving, and 4.4 grams of fat. Bonus? More than 150% of the daily recommended amount of Vitamin A, thanks to the butternut squash, which is also rich in beta carotene, iron, zinc, and calcium.

The sweet apples are a nice contrast to the savory bacon. The warmth of the cinnamon adds a subtle spice. And the bright color is a nice perk on a dull winter day. 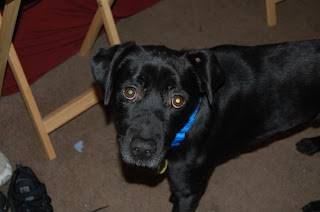 And on a personal note, in honor of Branny's "Souper Bowl," this soup post is dedicated to Mutts. Mutts was not "my" dog, but I loved him as if he were my own. He was my foster dog from the Animal Care and Control shelter in Philadelphia. I don't know old he was. I don't know anything about his past. He wanted nothing more than to cuddle and play a little fetch.

But he was extremely dog-aggressive. He attacked my own dogs on three separate occasions. It broke my heart to do it, but I sent Mutts to Rainbow Bridge on March 9, 2010.

* - To make this recipe vegetarian, omit the bacon, and cook the vegetables in garlic-infused olive oil, and sub vegetable broth for the chicken broth.
** - If you don't have an immersion blender, cool the vegetables and liquid to room temperature, and puree in a food processor or blender, in batches if necessary. Reheat in a clean sauce pot.