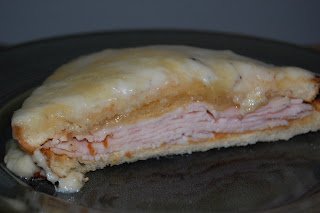 This recipe swap was themed "celebrity chef" recipes. It could come from a magazine, book or TV show, as long as the recipe was from a celebrity chef. What recipe would I receive? Would it be an appetizer, main course, dessert? Would it be Italian, Mexican, Indian ethnic food? Which celebrity chef would it come from? The possibilities were endless.

As it turns out, my recipe came from Ina Garten, courtesy of Jey from The Jey of Cooking. I must admit, when I first saw that my recipe was for Croque Monsieur sandwiches, I got mixed up and thought I would be making Monte Cristo sandwiches and was excited because I really liked Monte Cristo sandwiches. Then I realized I was thinking of the wrong sandwich — but in my defense, they are similar: a Monte Cristo is a fried ham-and-cheese sandwich; a Croque Monsieur is a grilled or baked ham-and-cheese sandwich.

Despite my mix-up and initial (minor) disappointment, these sandwiches were delicious. This recipe is easy to make and takes less than 30 minutes, even if you grate your own cheese. If you're not a mustard fan, don't be put off by its inclusion, it does not have a strong presence in the final dish. Do try to find Black Forest ham. It has a particular flavor that "regular" smoked ham does not.