The Mister has been making a few comments lately that I must prefer him on the heavier side. And in hindsight, a lot of what I've cooked lately has been on the higher-fat, less-healthy side. So, I made a concerted effort to throw a few lighter, healthier recipes into the weekly meal plan.
I picked up an issue of Cooking Light, and perused the recipe index. My pantry and fridge/freezer were pretty much empty. None of the usual protein options (beef, pork, chicken, fish) were particularly appealing.
Then I saw this pizza. Not exactly quick at 55 minutes to make, but easy, with only 15 minutes of hands-on prep work. The less prep work, the better, since The Peanut has entered a clingy phase. Four p.m. hits, and all of a sudden, he is miserable if he is anywhere other than my arms. I have an assortment of baby carriers that allow me to get things done even while holding him, but cooking over a hot stove with a baby strapped to my chest doesn't sound like a safe plan.
I made very few modifications, and what I did change probably doesn't affect the nutritional value all that much. As originally written, each serving (2 slices) contains just over 400 calories and 13 grams of fat. The pizza was packed with flavor, thanks to the homemade sauce, and you can easily substitute whatever veggies you have on hand. It had us wondering why we don't make homemade pizza more often. 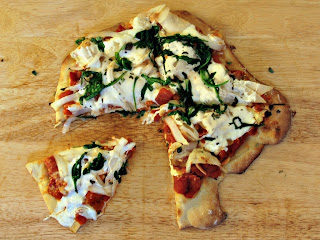