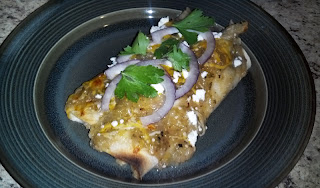 In preparation for the arrival of the newest member of the DNCWWO household in early December, I'm compiling a list of recipes to freeze, as I'm sure I won't have much time for cooking once the baby arrives. I have a few favorites, but I wanted to test out some new recipes, too.

I also want to have a variety of flavors. I intend to try breast-feeding, and I know that what I eat will affect how my breastmilk tastes. The tomatillos in the recipe below were a new taste for me (I took all the seeds out of the serrano chile, so the sauce was sweet, rather than spicy). I was an extremely picky eater as a child, and I don't want my son to be the same way.

If you're not a fan of chiles, substitute half a red bell pepper for the serrano chile. Also, the sliced rings of red onion are not cooked in this recipe, so soaking them in ice water takes out the raw bite.

To make this recipe freezer-friendly, make the sauce and freeze it, then assemble the enchiladas and place them in a foil-lined 13 x 9 baking dish (or place them in a disposable foil pan), cover with tin foil and freeze. The night before you want to cook them, thaw in the refrigerator overnight, and proceed with step 7. The remaining half-cup of shredded cheese for topping can also be frozen, though the texture will be a bit crumbly.

* The "heat" in the serrano chile comes from the seeds. Leave two or three seeds in the pepper to give the sauce some extra heat.
** Queso fresco is a creamy, soft, mild unaged white cheese, most often made with cow's milk. The name is Spanish for "white cheese." If you can't find it, substitute feta.