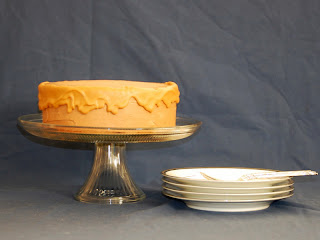 Though I work as a graphic designer by day (well, more like by night, but that's not the point), I also have an Associate of Science degree in Pastry Arts. I worked briefly in the food service industry, icing grocery store cakes baking bread, and plating restaurant desserts.

However, my daydreams of what it would be like to work in a bakery were slightly (aka, starkly) different from reality, which is partially why I returned to graphic design.

That being said, I still love to bake and decorate. I just prefer to bake and decorate one cake, two dozen cupcakes, or batch of cookies at a time, not 25 cakes, 200 cupcakes, or thousands of cookies (if I ever see another poinsetta-decorated cupcake again . . . ). I still make birthday cakes, bridal and baby shower cakes, cookie trays, and even the occasional wedding cake for friends and family.

When The Mister's birthday rolled around earlier this month, he said he didn't want me to feel inconvenienced and pressured to make him a cake. Silly man. I love any and all excuses to make cake. Birthday? Make a cake! Christmas? Make a cake! Arbor Day? Make a cake!

I finally got The Mister to tell me what flavor combination he wanted: chocolate and peanut butter. Which happens to be my favorite combination of sweet flavors. There was no way I was NOT making this cake!

I found the peanut butter filling on CakeCentral.com. After mixing it, I gave some to The Mister to taste on a scrap of cake. The verdict? "Nearly orgasmic." I'd say that's a ringing endorsement.

I chose Rose Levy Berenbaum's Classic Egg White Chocolate Buttercream from her bookbook, The Cake Bible, partly because of the description ("the color of rich milk chocolate and . . . a more assertive chocolate flavor") and partly because I had 14 egg whites in the refrigerator that I needed to use up and I wasn't in the mood for an omelet. Given the source, I had no doubt the icing would be heavenly, and I wasn't disappointed. The icing is light and airy, and very chocolate-y.

I finished the cake off with a drizzle of melted peanut butter thinned with some heavy cream. It set up almost as soon as I drizzled it onto the cake, so instead of thin drips down the sides of the cake, it dried into a lump around the top. Oh well. Still tasted good. 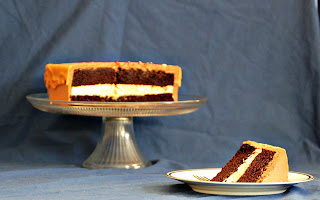