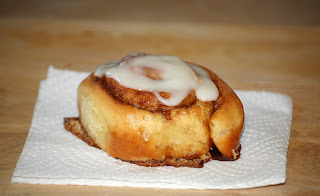 Recipe #2 from our Mother's Day brunch buffet is cinnamon rolls. I've blogged about them before, but decided to use a different recipe this time. My other recipe is meant for large-volume baking, and I didn't want to take the time to scale it down. The other recipe is meant to be completed in one day. I wanted to prep my cinnamon rolls the night before and bake them in the morning.

Enter Alton Brown and his Overnight Cinnamon Rolls. I had seen his rolls mentioned many times when users posted in search of tried-and-true recipes. They were very easy to make. Alton's recipe uses instant yeast as opposed to dry active yeast, which means no fussing around with "blooming" the yeast in warm water and wondering if it's too warm. The yeast mixes right in with the flour and the salt. The mixer does most of the work for you, but it's fun to give the dough those last few kneads by hand. The dough feels so soft and warm in your hands.

The sweet dough is easy to handle and roll out. If it's springing back too much, let it rest about five minutes and try rolling again. Don't be afraid to roll the tube tightly and pinch it when it's done. This prevents the rolls from coming apart as they bake.

Ingredients
For the dough: