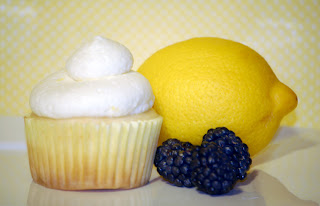 I recently participated in a discussion among other food bloggers about the food at casual dining chain restaurants. Places like The Olive Garden, TGI Fridays, or Applebees. The food is decent, but doesn't always quite live up to your expectations.

The discussion turned into a question: "Have you ever eaten at a chain restaurant and thought, 'I could make this better at home'?" Which led to a link-up called Food Unchained. Participants were asked to take a chain restaurant dish and improve it. I thought for a while about what I would chose. One particular restaurant I heard hyped quite often was The Cheesecake Factory. My first visit was somewhat of a let-down. After a three-hour wait to be seated, we had a "just ok" meal, and while the desserts were delicious, they were no  better than I make at home.

One particular dessert I felt I could improve upon was the Lemoncello Cream Torte. Layers of vanilla cake, lemon-flavored cream, lemon-soaked lady fingers, topped with whipped cream. Despite the light lemon flavor, the cake feels rather heavy. The lemon flavor was nice, but I felt it would benefit from the addition of a complementary flavor. And finally, have you seen The Cheesecake Factory's portions? They are enormous! This dessert needed to come back down to human proportions.

I started with the Joy of Baking White Butter Cake recipe (for the sake of convenience, a boxed white cake mix is also fine), and baked the batter as cupcakes. I filled each cupcake with sweetened, thickened blackberry puree, and topped each one off with a lemon-flavored whipped cream/cream cheese-hybrid icing. These cupcakes are light in flavor and in texture. The sweet-tart blackberry puree is a perfect complement to the sweet-tart icing. And at less than half the size of a slice of Lemoncello Cream Torte, you won't regret eating every bite.

Don't forget to visit Crazy Foodie Stunts to see what other bloggers created for Food Unchained.

Ingredients
For the cake: