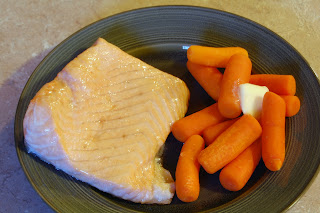 As much as I love the flavor combination of lemon and dill on salmon, I wanted a different flavor with last night's dinner. I searched the web for salmon recipes, and saw a lot for salmon with honey and Dijon mustard sauce. However, I can't stand mustard, and don't keep any in the house. There were several recipes for salmon with soy sauce, but we had run out of soy sauce making burgers earlier in the week.

Then I found Lemon-Honey Grilled Salmon on a blog called Cooking in Sens. The sweet-tart flavor combination sounded appealing, though I wasn't sure how it would pair with the salmon. I didn't want to take the time to marinate the salmon, so instead I used the mixture as a glaze during baking.

It turned out to be a great flavor for the salmon. The sweetness of the honey cuts the tartness of the lemon, and gives an overall very subtle flavor to the salmon. Delicious!