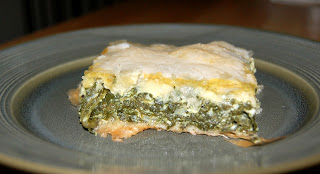 I don't know which swap style I like more: the themed ones or the Secret Recipe Club ones where I'm assigned a blog and can choose any recipe I want. I'm really glad our swap does both!

My assigned blog was I Was Born to Cook. I was initially apprehensive, as I saw a lot of Mediterranean and Greek style recipes. I try my hardest not to be a picky eater, but I just don't do olives, and I cannot eat most nuts. However, after spending an evening reading through her recipes, I stopped after noting the names of five that sounded good (and I only made it halfway through her blog). I asked the Mister which of the five he preferred. He wanted the Braised Short Ribs. I wanted the Caramel French Toast. Each of us picked the Spanikopita as our second choice, so that's what I made.

I always thought Spanikopita sounded delicious — spinach is my favorite green vegetable. But, being a Greek dish, I assumed it had nuts in it. I was pleasantly surprised when I recently learned it did not. I tasted it and loved it. I made Melissa's recipe exactly as written. Hers came from an old Greek cookbook, and why mess with the experts?

It was excellent, well worth the time and labor it takes to make it. The dish is very versatile: cut it into small triangles to serve as an appetizer, or a large diamond shape to serve on its own, or smaller diamonds to serve with a simple Greek salad, or as a side to a main entrée. Once baked and cut, the pieces can be individually frozen for later snacking.

Spanikopita (Spinach Pie)
From I Was Born to Cook