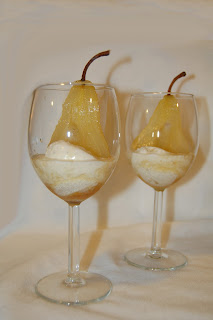 The Mister is trying to lose weight. I have a sweet tooth, particularly for desserts of the chocolate and high-fat variety. I felt really bad eating chocolate ice cream with an almost equal amount of whipped cream on top while he ate an apple, so I decided to make a dish that I haven't made since culinary school: poached pears.

Poached fruit is versatile dessert. It can be eaten warm, room temp or chilled; on its own, with ice cream, or a slice of cake. Most firm, juicy fruits can be poached. I used white wine below, but you can use red as well, which adds a beautiful jewel tone to the fruit flesh.

Pears are a particularly good fruit to poach because their natural flavor is so light, they take on the flavors of the poaching liquid and any added spices very well. Experiment with different spices: whole cloves, star anise, allspice berries.

The skin of the fruit can be left on (which prevents the fruit from falling apart as it poaches), or it can be peeled off (trying to cut through the peel with just a dessert spoon is a bit difficult).

And the aroma this creates should be one of Yankee Candle's next scents!