Time to give some attention to my poor, neglected blog.

I'm currently 15 weeks along in my pregnancy. I'm just starting to get the smallest hint of a bump. 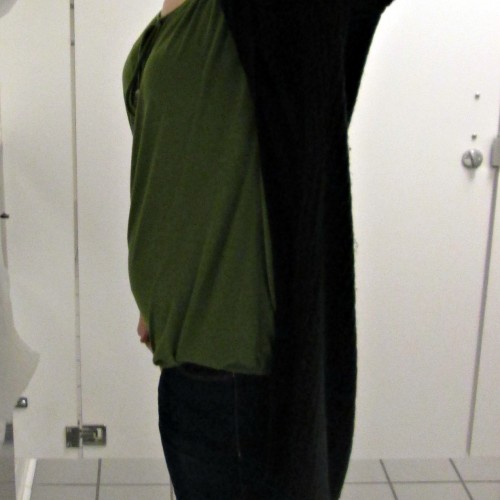 Okay, fine. It looks like I indulged in one too many slices of pizza for dinner. Which I may or may not have actually done recently.

According to TheBump.com, Baby is the size of a navel orange. We don't know yet if Baby is a boy or a girl. My anatomy scan is scheduled for mid-June, so if Baby cooperates, we'll find out then.

We had a scare last week, which resulted in spending about 5 hours in the emergency room. I was having some abdominal pain at work, and later discovered I was bleeding. But the ER doctor did an ultrasound, which showed the baby happily kicking away, with a strong heartbeat. I was diagnosed with a "threatened miscarriage," which is the generic term for any unexplained bleeding during pregnancy.

My morning sickness has mostly eased, but I still get the occasional bout of morning sickness. Since I'd lost weight from one appointment to the next, my doctor gave me an anti-nausea medication, Reglan, to help fight it. I'm still nursing Liam, who is now 17 months old, so I need to be eating even more calories than other pregnant women to 1) help maintain my milk supply, and 2) help the baby grow.

Speaking of eating, I found a new snack that I just LOVE — Brookside's Chocolate-Covered Pomegranate Seeds.

My mom picked up a bag for me from Sam's Club, and nearly one quarter of the bag was gone about fifteen minutes after she gave it to me! The company also makes chocolate-covered açai with blueberries, and chocolate-covered goji berries with raspberries. YUM!

Other recipes we've enjoyed lately, but I haven't blogged about:

As for Liam, he has adjusted quite well to daycare. He no longer cries during drop-off or pick-up. I love being able to log-in to the webcam, and see him sitting in a circle with the other children, listening to a story, playing with blocks, finger-painting, or eating a snack.

He chatters away most of the day, though he still only says about ten "words," the rest is still just babbling, but he's using intonation, so I can tell when he's asking a question, or trying to get my attention.

His appetite seems to be back, though he's still picky about what he'll eat. He refuses most meat unless it's in meatball form, or breaded "fingers" (chicken nuggets, fish sticks, etc). He still loves almost all kinds of fruit, but refuses most vegetables, so he gets a fruit/veggie combo puree pouch every once in a while. Sometimes he'll finish one and ask for another. We use Plum Organics and Earth's Best, depending on what's on sale at Target.

The other day, I handed him a cup of yogurt and a spoon to see what would happen.

I'd say he successfully ate ¾ of the yogurt on his own. I don't know if they've been teaching utensil use at daycare, or if he just figured it out on his own.

Daycare also works with the kid on sign language, so Liam signs "More," "Eat," and "Drink" at home. We get a sheet each day detailing their activities, so I know they are also working on "Please," "Thank You" and "Sorry."

That's it for now, enjoy your week!