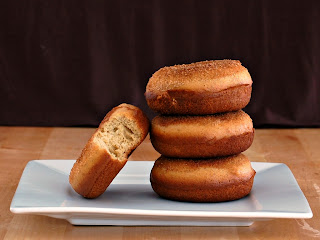 It's been several weeks since I made my first batch of donuts. Far, far too long.

I wanted another seasonal flavor, and have seen several mentions of apple cider donuts on Facebook. I had cider in the refrigerator, but after writing yesterday's blog post about homemade mulling spice sachets for Christmas gifts, I had a thought. What if I used mulled cider instead of regular cider?

I chose to use a recipe from Hezzi D's Books and Cooks as my inspiration. I substituted an equal amount of mulled cider for regular cider. I wasn't sure how prominent the mulling spices from the cider would be in the finished product, so I cut the amount of cinnamon in half (instead of completely omitting it). And finally, I substituted buttermilk for the low-fat milk.

These are delicious and moist, with definite hints of warm cinnamon and nutmeg. They also have a nice tangy flavor, thanks in part to the buttermilk. I wish they had a stronger apple flavor. Reducing the cider concentrates the flavor, so I was a bit surprised that they didn't have a more "apple-y" taste. However, they are still delicious. 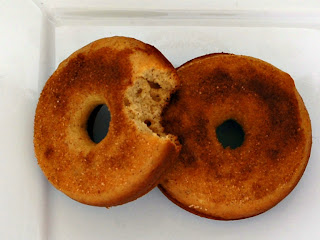