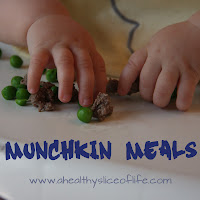 Liam will be 8 months on Saturday (!?!). He will now eat just about everything we put in front of him. He's also much more interested in "helping" us spoon-feed him his purees. His idea of "helping" is to grab the spoon right at the tip, where the food is, smearing it all over his hands and in between his fingers. So, we've started offering him some finger foods, to give him practice feeding himself.

Lunch is not an everyday occurrence at this point. If I have errands to run, I'll do them after Liam's morning nap, which typically goes from 10 a.m. to 12:30 p.m. Considering Liam makes a HUGE mess while eating, I don't bother trying to feed him outside of our home, aside from nursing him.

But when we do eat lunch, here are some typical meals:

The "pea soup" was actually an accident. Liam HATED peas the first time I offered them. I waited a few weeks, and tried again, this time adding some freshly expressed milk. Well, I added too much (it was probably a 1:1 ratio of pea puree to milk) and added some rice cereal to thicken it. Liam ate every bite.

At this point, we've been waiting three days instead of four between introducing new foods. Liam has not had any reactions to anything we've introduced so far. The one thing we are apprehensive about is strawberries. The Mister was allergic to strawberries as a child, though he did outgrow it by the time he reached elementary-school age. The recommendations on allergenic foods keep changing. I already know that our pediatrician advocates for an old-school, conservative approach to feeding solids (start with rice cereal, move on to vegetables, etc.). Still, I'll ask their opinion at his next appointment and find out what to do in case of allergic reaction.

We plan to introduce summer squash, broccoli and ground chicken next. Now that Liam has tasted a wide variety of foods, I've been consulting my baby cookbooks for more complex dishes for Liam to try. I've written out one of his favorites below, which can be served as a puree or finger food.