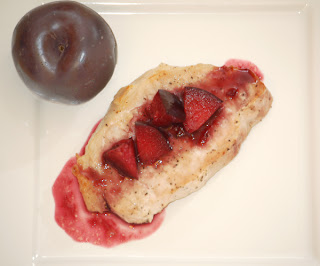 It's finally summer time, which means plums are in season! If you remember, about a month ago, I wanted to make this recipe for Pork Chops with Plum Sauce, but couldn't find plums anywhere! Since I had already purchased the red wine for the sauce, I ended up making a red wine reduction to sauce the pork.

I finally found plums at Trader Joe's last weekend and added a basket to my cart, then stopped by the liquor store. Last month, I had picked up a bottle of Pinot Noir for the recipe, but when reading the labels, [yellow tail] described their Merlot as "ripe plum flavors with a touch of warm spice." Perfect for my plum sauce! And at $7.99 a bottle, easy on the wallet. I think I have tried nearly ever variety of wine they offer, and haven't tasted one I haven't liked (that's my honest opinion, I have not been paid by [yellow tail] to endorse their wines).

This recipe was worth the wait. The sauce is tangy and slightly sweet and complements the pork well. The pork itself is quick-marinated in the wine with a little ginger and cornstarch. The cornstarch absorbs the flavors of the marinade and provides a crisp crust when the pork is sautéed. Don't be impatient with the sauce — let it simmer and reduce to a nice syrupy thickness. It will have a lot more flavor and will coat the pork rather than run off of it.