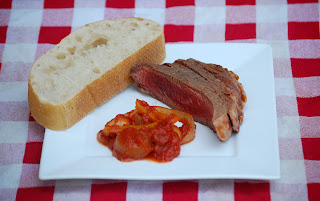 Steak is not often on the menu in our household. But it was important to me to make The Mister Steak and Eggs for Father's Day, and steak was on sale at our local grocery store. It had to be fate! I found a nearly-2-pound sirloin steak for under $10.00. I set aside 8 ounces for the steak and eggs, and set about searching for a recipe to use with the other portion.

When I came across Steak Pizzaiola in an issue of Food Network Magazine, I didn't even know what the title meant. Apparently, "pizzaiola" means "prepared with an Italian sauce made from tomato and oregano." And there are lots of tomatoes in this recipe! It reminded me very much of one of our household favorites, sausage with peppers and onion.

Following Food Network's cooking instructions exactly yielded a perfectly cooked steak. Seared on the outside, yet still slightly pink on the inside, just the way I like it. The peppers were tender, but not mushy. Adjust the amount of red pepper flakes up or down for more or less heat, depending on your preference. Since sirloin does not go on sale often, I may try this recipe again, using stewing beef instead of sirloin. Chicken would probably also taste great in this dish.

The original recipe recommends serving this dish with a side of focaccia. I chose to serve it with ciabatta, but really, any Italian bread would do just fine.