This post is sponsored in conjunction with PumpkinWeek. I received product samples from sponsor companies to aid in the creation of the PumpkinWeek recipes. All opinions are mine alone.

Moist and lightly sweet pumpkin cupcakes are topped with a creamy maple-flavored Swiss meringue buttercream. They're a quintessential fall dessert! 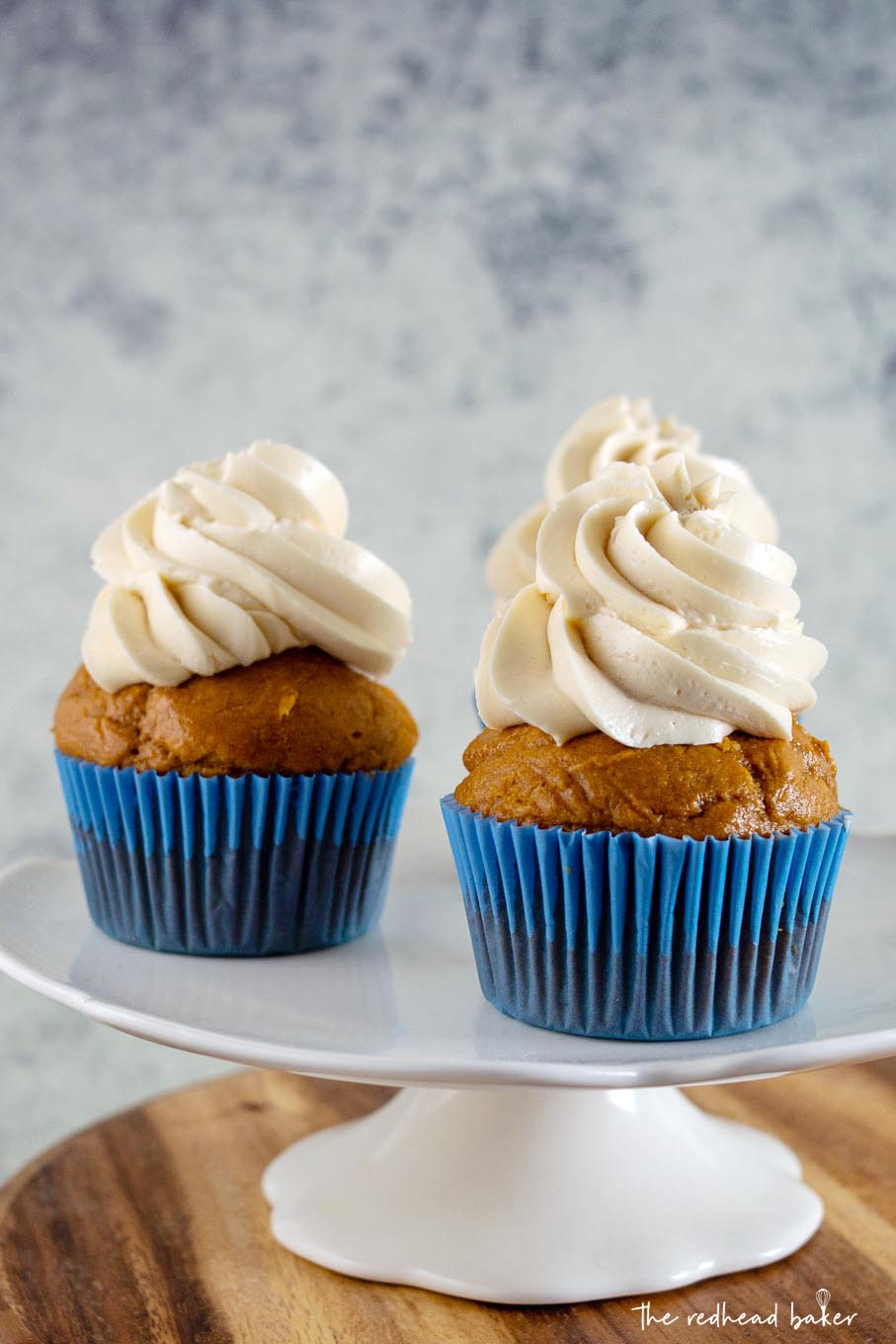 Today I'm sharing pumpkin cupcakes with maple buttercream. I really, really like these cupcakes. They're light and fluffly, like cupcakes should be. They also not overly sweet. 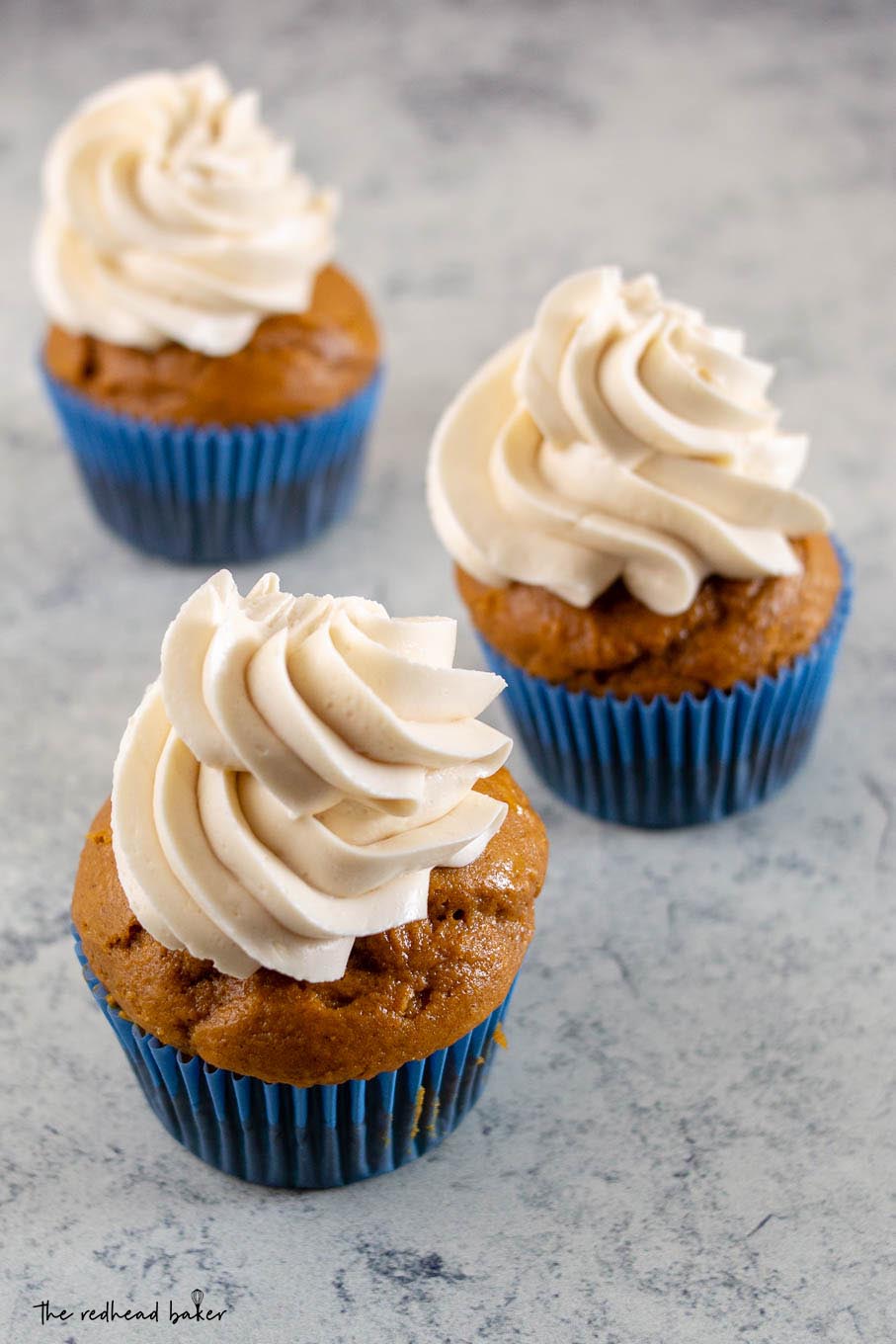 You can make these cupcakes up to two days ahead of time and store them, unfrosted, at room temperature. Cupcakes tend to lose moisture when stored unfrosted in the refrigerator.

But let's talk about my favorite part: the frosting. The frosting is a maple-flavored Swiss meringue buttercream. I love the flavor and smooth, creamy texture of this buttercream. Swiss buttercream is also easier to make than French or Italian because it doesn't involve cooking the sugar into a syrup. 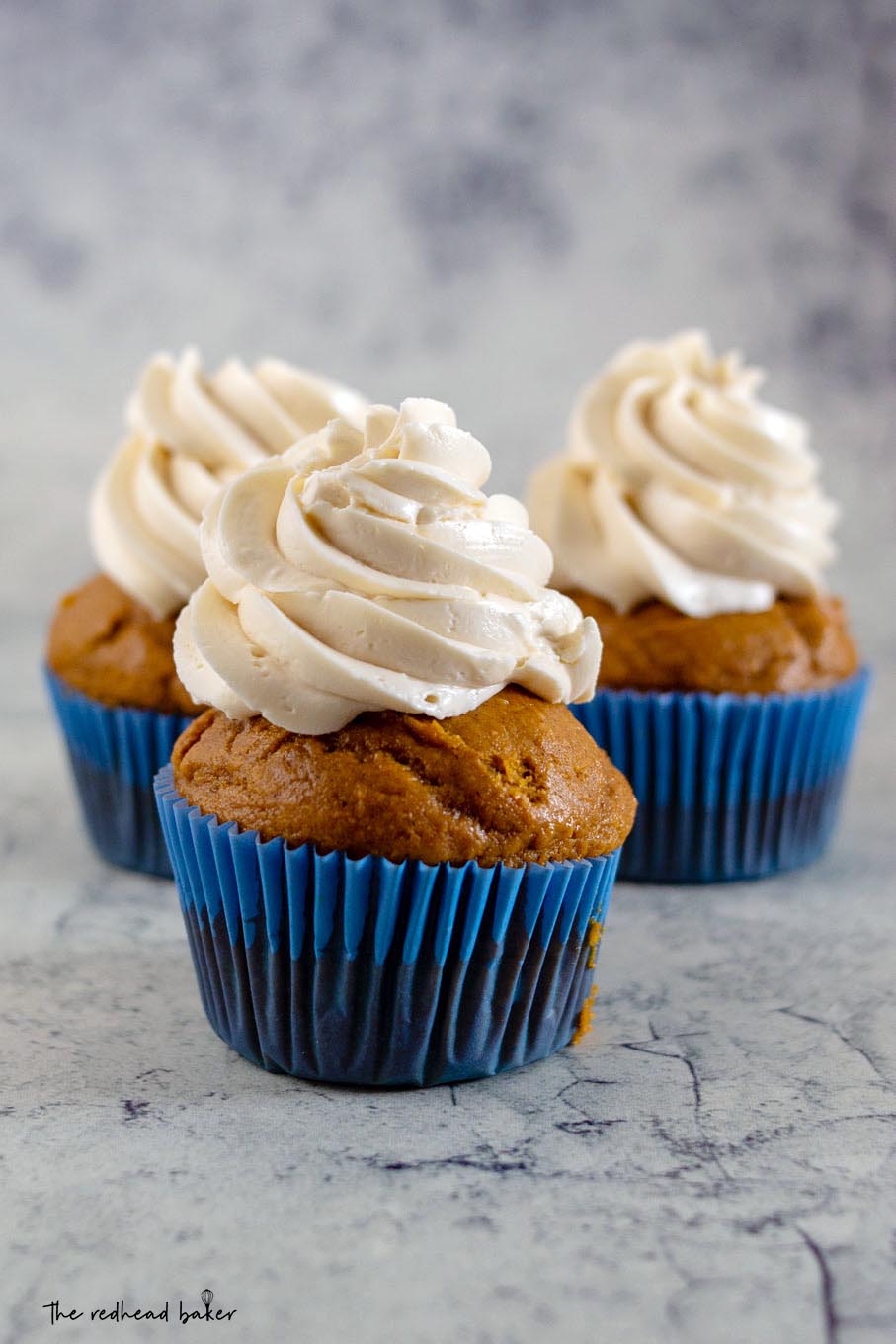 Obviously, from the name, this is a meringue-based buttercream, so as with all meringues, you need to ensure you start with a clean, dry bowl. Meringue will not whip up if it comes into contact with even a trace of fat. Before I start any meringue, I wash my bowl with hot, soapy water, dry it thoroughly, then wipe it down with a paper towel dampened with white vinegar.

Some tips for Swiss buttercream success: once you've whipped your egg white/sugar mixture to soft peaks, make sure they are room temperature before starting to add the butter. Warm meringue will melt the butter. It won't ruin your buttercream, but it will make the process take longer.

If, once you've added all the butter, your mixture looks separated, watery, or curdled, just keep whipping on medium-high speed. Walk away for about five minutes. You'll probably come back to luxuriously creamy buttercream. If not, chill your bowl for about 10 minutes, then continue whipping. 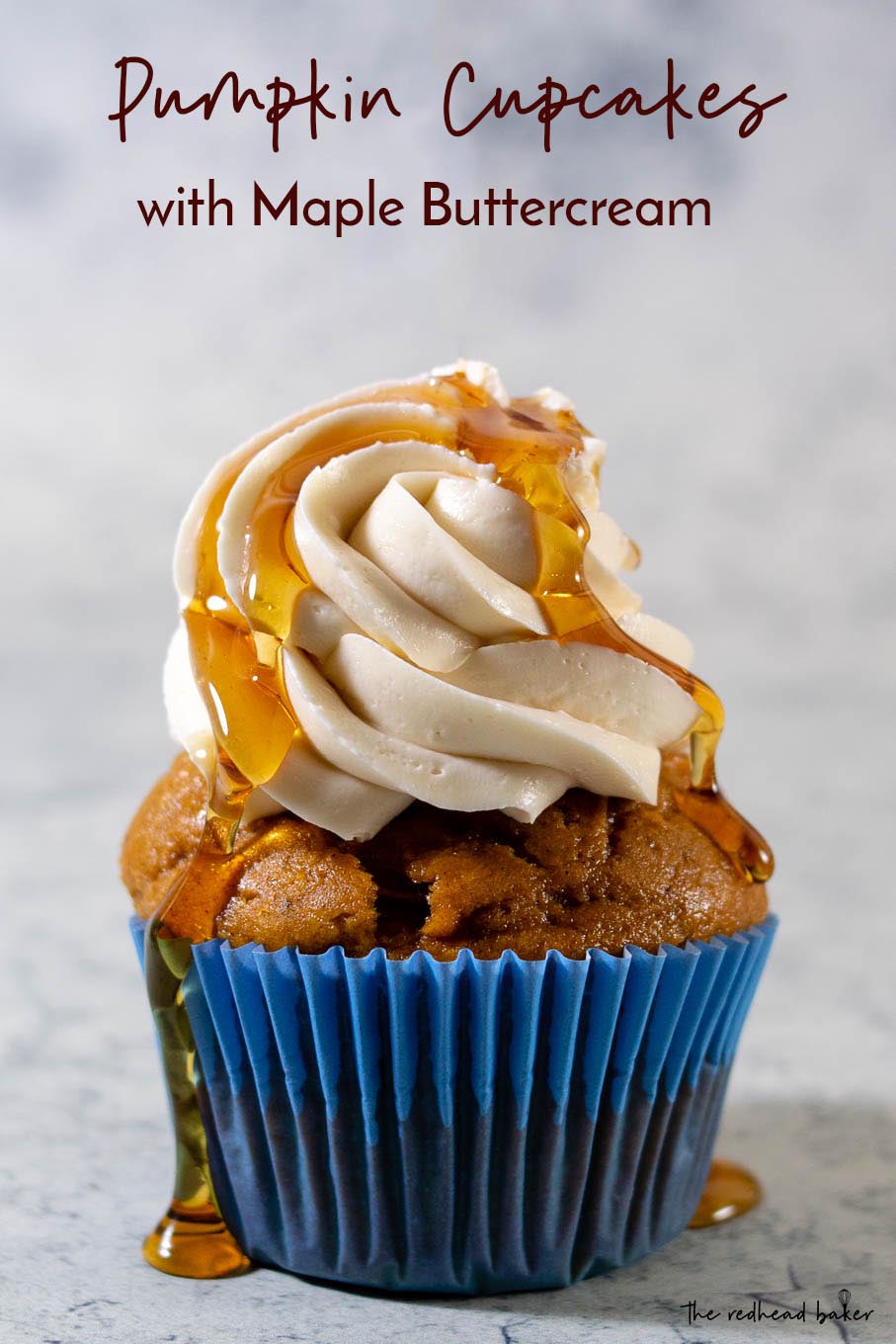 As an Amazon Associate and member of other affiliate programs, I earn a small percentage from qualifying purchases.

I am not a certified nutritionist. This nutrition information is automatically calculated by third party software and is meant as a guideline only.

Disclaimer: Thank you PumpkinWeek Sponsors: Dixie Crystals, Cabot Cheese, and Eggland’s Best for providing the prizes free of charge. These companies also provided the bloggers with samples and product to use for PumpkinWeek recipes. All opinions are my own. The PumpkinWeek giveaway is open to U.S. residents, age 18 & up. All entries for the winner will be checked and verified. By entering you give the right to use your name and likeness. The number of entries received determines the odds of winning. Three (3) winners will be selected. The prize packages will be sent directly from the giveaway sponsors. The PumpkinWeek Bloggers are not responsible for the fulfillment or delivery of the prize packages. Bloggers hosting this giveaway and their immediate family members in their household cannot enter or win the giveaway. No purchase necessary. Void where prohibited by law. This promotion is in no way sponsored, endorsed or administered by, or associated with Facebook, Instagram, Pinterest, Twitter or any other social channel mentioned in the PumpkinWeek posts or entry.