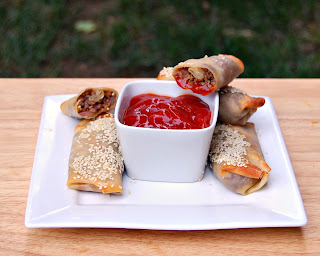 Blogger’s Choice recipe swap time again! This time around, I was assigned the blog Tasty Treats by Tina, from which I had to choose a recipe. As I did with past Blogger’s Choice swaps, I tried to browse through most of the blog entries before choosing a recipe to make, but I stopped when I got to the Cheeseburger Egg Rolls, because they sounded like the perfect appetizer to bring to a party to which I was invited.

Homemade egg rolls were always something that intimidated me, but it wasn’t until I made Philly Cheesesteak Egg Rolls at home — because I was severely depleting my bank account by eating them at a cafe near my apartment — that I realized how easy they are to make. I found it easier to work with egg roll wrappers than phyllo dough (it doesn’t dry out quickly like phyllo, and there is less breakage). Even so, I’ve included a series of photos below the recipe, illustrating how to roll an egg roll. I bought a 1-pound package of wrappers, which I found in the produce section of my local grocery store, near the tofu, and learned that the leftover wrappers are freezable for up to 2 months.

These were a hit at the party! I’m very glad I doubled the recipe written below, as they went quickly. I left some fat in the skillet after browning the meat, hoping to prevent the meat from drying out when the egg rolls were baked. The plan worked, the egg rolls were nice and moist. The original recipe calls for serving with Russian dressing, but knowing how “adventurous” other guests at the party would be, I chose to serve these with regular ketchup.