Ages ago, I went out to Michigan to visit some friends. I was only there a few days, but had a lot of fun. We went to the Birch Run Outlets (on Black Friday, if my memory serves me correctly), had dinner one in Mexicantown, and dinner the next night at The Redwood Lodge in Flint. They also introduced me to Middle Eastern food. There was a chain of fast food restaurants serving Middle Eastern cuisine, though for the life of me, I can't remember the name of it. Anyway, I had the lamb shawarma, and I loved it!

So, when I found a recipe for chicken shawarma in my assigned blog for the Blogger's Choice Recipe Swap, Jenna's Cooking Journey, I knew that was the recipe I was going to make. 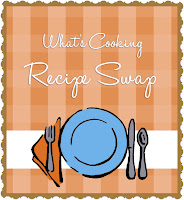 Shawarma can refer to a method of preparing meat, where it is grilled on a rotating spit, or a Middle Eastern fast food sandwich (typically served in a pita pocket, or wrapped up in flatbread) that includes meat cooked that way. The meat is typically lamb, veal, chicken, turkey, beef, or goat. Fun fact: did you know that, despite its lack of popularity in the United States, goat is the most widely-consumed meat in the world?

Anyway, the chicken in this recipe marinates for at least four hours in a yogurt/spice mixture (I let it marinate overnight). It is then pan-sauteed, and stuffed into a pita with lettuce, tomato, cucumber, red onion, and a yogurt sauce. The Mister was so excited when I told him about the recipe. Not only is it a fun deviation from our typical dinners, but it's also a lot healthier than most of the recipes I've been cooking lately. Each sandwich has about 336 calories, 5 grams of fat (less than 1 gram of saturated fat!), and 6 grams of fiber (recipe nutrition info calculated with SparkPeople's Recipe Calculator).

The sandwiches were so flavorful, both spicy and slightly sweet. Typically I eat dinner leftovers for lunch the following day, but there were none! These were so good, we both had second helpings. 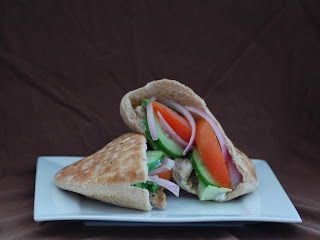 Ingredients
For the marinade

For the yogurt sauce

To see recipes from other What's Cooking bloggers, visit the links below!