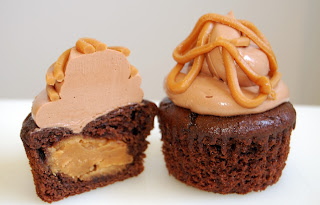 As I've mentioned before, we alternate between themed swaps (specific proteins, cuisines, ingredients, etc.), and swaps where we're assigned a blog and can choose any recipe we want. The latter is now called the "Blogger's Choice" swap. And that's what this round was themed.

I was assigned the blog Feed Me, Seymour by Kim Cooper. The blog has a lot of recipes that looked delicious, both sweet and savory, but I kept going through the entire blog until something really jumped out at me.

And there it was: chocolate peanut butter cupcakes. I haven't baked in a while. And this recipe combined two of my favorite flavors. Kim included a simple American buttercream icing, but I decided to double up on the chocolate AND the peanut butter and iced mine in chocolate mousseline buttercream, then topped them with a peanut butter drizzle. Because there is no such thing as too much chocolate or peanut butter.

These cupcakes were AMAZING. The filling tastes like the center of a Reese's Peanut Butter Cup, but better. The cake is moist and chocolate-y. The icing is light and creamy. And then more peanut butter. These do take a while to make, so start two or three days before you plan to serve them. Then sit back and enjoy the sugar high!

Some tips: (1) chill the peanut butter filling briefly to firm it up before scooping and rolling. (2) During baking, rotate the muffins tins 180 degrees and at the same time, put the top pan on the bottom shelf and vice versa. If your oven has hot spots, this will help the cupcakes bake evenly. (3) For all parts of the recipe, but especially the icing, measure out all ingredients first and get all cookware and utensils ready to go. Once the sugar syrup reaches the appropriate temperature, you'll need to work quickly. (4) Use a candy/deep fry thermometer when making the icing.

Also, be aware that the icing recipe makes about a cup more than you'll actually need to ice the cupcakes, so you can have it for breakfast the next day save it for later.

Ingredients
For the filling: