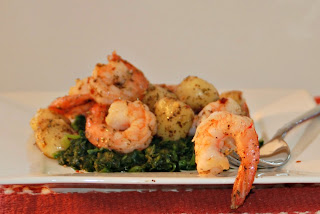 I went on a seafood strike when I was young, maybe 8 years old. My parents took me to a seafood restaurant at a New Jersey beach town, and the smell made me feel sick. I refused to touch seafood for a long time.

It wasn't until my cousins wedding in 2003 that I consented to tasting it again, and it was almost by force. She got married on the hottest day of the year. She chose the church she did because it had air conditioning — which broke that morning. The reception hall was over capacity and the air conditioning couldn't keep up.

We were all starving. The sole appetizer was shrimp. I could either eat some shrimp, or wait for dinner to be served. I ate a piece of shrimp. Then another. And another. I enjoyed every bite.

Fast forward to 2012. Even though I've been making an effort to make new dishes, we were still in a rut. Except, the rut was ingredients. It was the same proteins over and over again: beef, chicken, pork, beef, chicken, pork. Occasionally some fish, usually tilapia or salmon.

Then one day, while perusing the sale pages, I saw that shrimp was on sale. I love shrimp! And I don't remember the last time I cooked with it. I searched various recipe sites for shrimp recipes. I wanted a summery flavor, something with citrus. I found a recipe that called for tossing shrimp and gnocchi in a vinaigrette of lemon juice, Dijon mustard, olive oil and basil. I was skeptical but made it anyway, as the fresh basil in my fridge was about to go bad. I tasted it, didn't like it and scrapped it.

But I wanted to use the idea of shrimp and gnocchi tossed with vinaigrette. Vinaigrette is a dressing with a ratio of 3 parts olive oil to 1 part vinegar. I put together a vinaigrette based on a copycat recipe for Carrabba's herb dipping oil. I chose red wine vinegar, because it has the mildest flavors of all the vinegars in my pantry.

I don't often "create" my own recipes, but I'm happy to say that this one was a success. I used Trader Joe's dehydrated gnocchi (sold near the dried pasta), but feel free to make homemade if you'd like (and have the time). I chose to serve the shrimp and gnocchi over spinach.