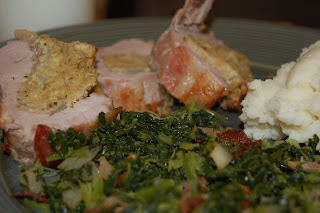 The Mister and I have been getting tired of our kitchen staples. For a change from pork chops, I bought a pork tenderloin from Trader Joe's. One my favorite impressive, yet simple, main dishes is a stuffed tenderloin. And we decided to give kale a try — neither of us have ever tasted it before. I decided to make bacon a recurring element in the meal: a slice of bacon cooked on top of the pork, and crumbled bacon tossed with the kale.

I used garlic, dried rosemary and sage in my pork stuffing, but many combinations of herbs and spices would work well: coriander, cumin, dill, fennel, savory and thyme are some of the more common flavorings used on pork.

Kale is a form of cabbage, and used similarly to spinach. It is rich in beta carotene, vitamin K, vitamin C, and lutein. I used frozen kale in my side dish, but fresh works just as well. Just remove the thick stems from the center before cooking.

Stuffed Pork Tenderloin
Based on this recipe from AllRecipes.com