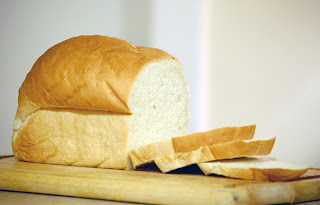 When I say "comfort food," what do you picture? A dish of creamy oven-baked macaroni and cheese? A big bowl of hearty stew? A grilled cheese sandwich with a piping hot bowl of creamy tomato soup?

My mother finally asked me if I realized how many calories I was consuming, and I realized how bad white bread is, but I will still occasionally bake a loaf as a treat for myself, and have a slice or two of toast with butter and blackberry preserves. Sliced thick, this bread also makes wonderful French toast. If there is any left to get stale, turn it into croutons, breadcrumbs or bread pudding. Because this bread has no preservatives, it will go bad more quickly than store-bought bread, so store it in a plastic grocery-store produce bag with a twist-tie, and keep it in the refrigerator. Freeze the second loaf, wrapped in two layers of plastic wrap.

Use an instant-read meat thermometer to measure the temperature of the water and the milk. If your liquid is too hot, you'll kill the yeast. If it is too cold, the yeast won't activate. In either case, your bread won't rise.