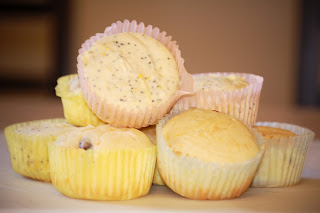 Today's recipe comes from the production manual of the culinary school I attended. The school has its own pastry shop, and every morning, pastry students take a "production" class, where they make the items that are sold to the public in the pastry shop: cakes, eclairs, cookies, brioche, baguettes, croissants, muffins, and more.

The muffin batter was made in bulk in a huge mixer, and refrigerated. Each morning, a student would portion out 5 pounds of the batter, add the mix-ins, and bake them off. That's why I chose to make this recipe for Mother's Day brunch. I was able to divide the batter in half, and make two kinds of muffins without the extra work of mixing and baking two recipes.

I've added a few flavoring suggestions below the recipe. I usually just eyeball the amounts for the mix-ins. You want to add enough so that some ends up in each muffin, but not so much that you have more mix-ins than muffin batter.