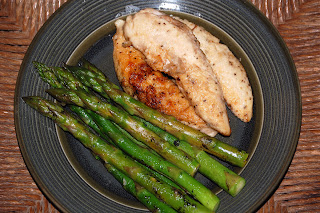 After graduating from college with the "Freshman 15" still hanging on, I opted to try the South Beach Diet to lose the weight. It worked really well for me (I am not being paid to mention the South Beach Diet, nor suggesting it will work for anyone; just stating that it happened to work for me), and opened me up to new ingredients and flavors.

You see, my childhood meals consisted of the same three proteins: chicken, beef and pork; and the same four vegetables: corn, carrots, broccoli and spinach. So cooking the recipes provided in the South Beach Diet cookbook introduced me to new flavors that I likely wouldn't have tried otherwise, such as asparagus, which has become my new favorite vegetable.

On a recent trek to Trader Joe's, I bought a package of big, fat asparagus spears. A week or so prior, while paging through an old Cooking Light magazine, I found this chicken and asparagus recipe that sounded good. It has only 289 calories and 8 grams of fat per serving. My usual method of preparing asparagus was to drench it in olive oil, so I was eager to try a new method of preparation.

I really enjoyed the recipe's flavors, although, even after cooking it down, the "sauce" is very thin (though still tasty). Next time, I will probably thicken it up with flour or cornstarch.

* If you prefer not to cook with alcohol, omit white wine and double the amount of chicken broth.