Today's guest post is by Kim, the author behind Feed Me Seymour. I "met" Kim through a cooking-focused forum, and found out she's formerly from the Philadelphia area. I love her Harry Potter Butterbeer cupcakes, and also made her restaurant-style guacamole (delicious!) but never grabbed a photo to blog about it. 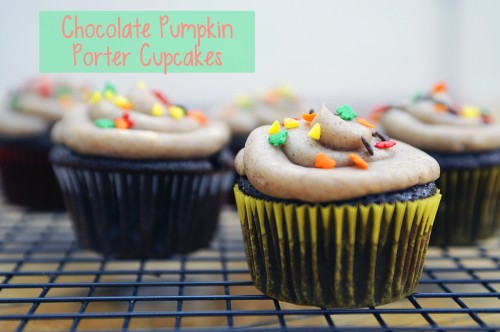 If you were to ask me in my early 20s about my beer preferences, the answer was simple. Moosehead. The end. I loved Moosehead and shunned all other beers. A great Canadian brew, Moosehead goes down smooth and pairs well with, in my opinion, just about everything.

But then a friend, a wise and knowledgeable beer-drinking friend, opened my eyes to the wide world of beer. Craft beers, to be a bit more specific. She started me out a bit gently, using Magic Hat variety packs as a test. We've since escalated to the point where we really aren't even sure anymore which beers we've tried and which we haven't. There is constant talk of some sort of tally system so we can remember which ones we love and don't (unanimous votes against Smuttynose's Brown Dog Ale).

Since branching out, I've tried and loved quite a number of brews. And of course, my eyes have been opened to the realm of pumpkin beers. I love a great pumpkin brew. For me, they have to linger more on the side of pumpkin pie or pumpkin spice. I feel like actual pumpkin itself is a bit too rustic to be a delicious beer. But something with a note of spice? Two thumbs up.

Of course, drinking beer also means cooking with beer is now an option as well. And when my pal Coleen at The Red Headed Baker asked for beer-laden contributions, I immediately opted-in. I brainstormed for a bit, lingering momentarily on a beer bread or something of the like. But then remembered I had a bottle of pumpkin porter in my fridge. It was fate. Porters tend to be a bit dark, a bit malty. And they are a natural companion for chocolate. So chocolate pumpkin porter cupcakes were born, complete with cinnamon spiced buttercream.

Recipe by Feed Me Seymour