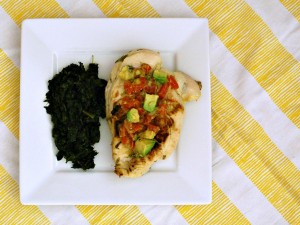 With our cold, dreary weather lately, I was really looking forward to the bright flavors in this recipe. So simple, so few ingredients, so quick to prepare.

So, you know something had to go wrong, right? What should have been a 20-minute recipe turned into 2 hours, and ended with a smoky apartment and a soaking wet, shivering toddler.

I try to choose recipes that take under 30 minutes, because I never know when The Mister will get home from work. His day technically ends at 4 p.m., but he sometimes stays late, and traffic is completely unpredictable. Liam is also unpredictable. Will he be content to sit in the living room and play with his Little People Zoo while I chop vegetables? Or will he cling to my legs, screaming until I pick him up and hold him?

As it turned out, The Mister got home rather early. Which was great, because it occurred to me, as I opened the refrigerator door, that The Mister had thrown out the lime juice a few days earlier, since it had gone bad. Lime juice was a rather essential element of cilantro-lime chicken.

Once they delivered the lime juice, I put the chicken in to marinate, and I made the salsa. When that was finished, I took the chicken out to saute it. I think my chicken breasts might have been bigger than the 6-ounce ones called for in the recipe, because they didn't finish cooking in the 12 minutes the recipe gave as a guideline. What's more, the acidity of the lime juice from the marinade made the kitchen VERY smoky. Like, I-don't-know-how-the-fire-alarm-didn't-go-off smoky. So, I decided to finish the chicken in the oven while The Mister opened every single window in the apartment and aimed our sad little box fan (it's about 8 inches square) to blow the smoke out the windows.

Where does the soaking wet, shivering toddler come in? Well, when hunger hits a toddler, they don't understand cooking, and that it takes time. So, The Mister had given him some graham crackers and a sippy of water to keep him happy until the main meal was ready. But Liam has a habit of playing with his sippy, where he takes in a huge mouthful of water, but instead of swallowing it, he lets it pour out of his mouth and down his front, soaking his clothes. With six open windows, and an outdoor temperature of 24 degrees, well, he got a tad cold. We stripped his clothes off, wrapped him in a fuzzy blanket, and he ate dinner on my lap.

Despite all of that, the meal was delicious, and will become a staple in our meal rotation (hopefully with a little less excitement next time).