It's the first Thursday of the month, which means it's time for Munchkin Meals, hosted by A Healthy Slice of Life — time to take a look at what Liam (14 ½ months old) eats in a typical day, via Instagram. (Psst! Do you follow me on Instagram?) 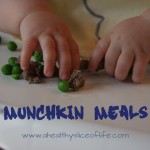 On a typical weekday, Liam wakes between 6 and 7 a.m. He nurses for about 10 to 15 minutes, then The Mister takes him out to the living room for breakfast while he gets ready for work (and I catch a few more Z's!). 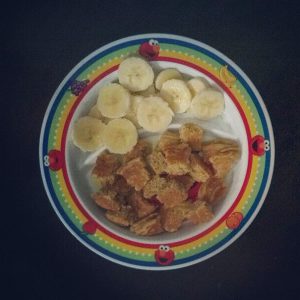 The Mister gets me up around 7:15 am, and Liam and I read some books, or play with his toys until nap time. Liam can't decide if he's ready to transition to one nap yet. He seemed to want to try about a month ago, but he gets way too cranky if he doesn't get that morning nap.

While Liam naps, I get some work done: graphic design projects for my contract job; photographing a recipe; writing and/or editing a blog post. Or just mindlessly waste time on Facebook.

After Liam gets up, we run errands. Now that I've started meal-planning and shopping for two weeks' worth of food (minus produce and dairy, which we replenish weekly), we don't have quite so many errands to run. But we try to get out of the apartment most days, just for a change of scenery.

Liam spends 80% of the time walking now, but only at home. Out in public, if I set him down on his feet, he will immediately drop to his knees, so I still need to carry or wear him, or place him in a shopping cart. He loves going out to run errands (minus the part when the car doesn't move, such as stoplights or in traffic). His favorite stores are Trader Joe's (surprised?) and a local pet supply store where we get our dogs' food and treats, because we almost always see dogs in there shopping with their owners. 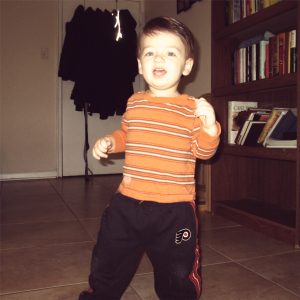 Back at home, we have lunch. His favorites lately involve tortillas. Sometimes I will spread roasted red pepper hummus on a tortilla, then a few slices of turkey, roll it into a pinwheel, and cut it into thin slices (he eats about half of an 8-inch tortilla). Other times, I will mix together about a ½ cup of black beans, ¼ of an avocado, a few sliced grape tomatoes and sprinkle it with cheddar cheese. I warm that in a skillet until the cheese melts, fold the tortilla over on itself, and slice it into wedges. Also favorites: Trader Joe's frozen chicken drumellas, and Trader Joe's frozen fish sticks, each with steamed veggies (he's big into peas right now). He also gets a serving of fruit, and some cheese. Sometimes it's peach slices and a cheese stick, but his favorite is sliced strawberries and goat cheese. 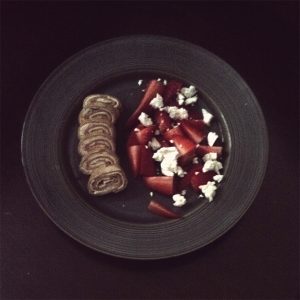 After lunch is another nap. While Liam sleeps, I'll scramble to do whatever work I should've done while I was wasting time on Facebook during Liam's first nap. I mean, um, prep for dinner: marinate meat, chop veggies, etc., and finish any work I didn't get to in the morning. Liam gets VERY clingly around 4-ish p.m., and only wants to be held.  He'll scream and cry if I put him down to start dinner. Sometimes I can get something started while giving Liam a snack, like Annie's Cheddar Bunnies, or Plum Organics Teensy Snacks (oh my god, have you tasted these? I want to eat a pack myself!).  But he eats his snack quickly, and I don't want to overfill him and ruin his appetite for dinner.

So, we play hide-and-seek, read some more books, check the mail, walk down to the laundry room, or play with the dogs until The Mister gets home.

Now, dinner. Liam has been showing his picky side at dinner. Cilantro-Lime Chicken with Avocado Salsa? Wouldn't touch it. And avocado was the first solid food he seemed to enjoy back around 7 or 8 months of age. Butternut Squash Lasagna? LOVED it the first night; wouldn't touch the leftovers the second night. Pioneer Woman's Enchiladas? LOVED them. Couldn't get the food into his mouth fast enough. 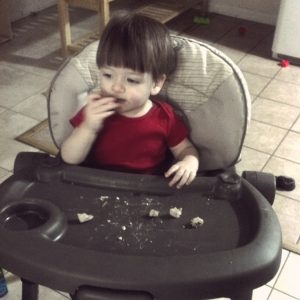 On nights when he won't eat what I've cooked, I offer him a slice of peanut butter toast and some fruit or veggies; or a purée pouch. I haven't found one he won't eat (though he loved the Earth's Best Butternut Squash Pear pouch and was mad when it was empty), though he gets upset when I insist on squeezing it for him; if I let him feed himself a pouch, he gets squeeze-happy and purée gets EVERYWHERE. Makes for an amused baby, and happy dogs, but not a happy mommy. I don't intend to cater to his pickiness and cook a special, different meal for him, but I also don't want him to go to bed hungry.

Bathtime is almost immediately after dinner (appropriate, since he gets so messy), followed by pajamas, brushing teeth, reading a story or two with Daddy, then he nurses from me, and goes to bed between 7:30 and 8 p.m.

Want to see more meal ideas for babies and kids? Head over to A Healthy Slice of Life!