I'm mature enough (some of the time) to admit when I'm wrong.

I never imagined myself having children. I was terrified of pregnancy, labor, delivery, and the responsibility of raising a happy, healthy, well-adjusted, productive member of society. When asked for the thirty billionth time when I was having a baby, I told everyone I didn't want one.

So, here I am, publicly admitting that I was wrong. I love being a mother.

I've never shared his birth story publicly, so I thought today might be appropriate. I'll try to keep it short and non-graphic.

On Sunday, November 20th, around 9 p.m. (two weeks before my due date), I was sitting on the couch, watching The Food Network's Thanksgiving Special. I felt some weird twinges in my stomach area, and wondered if these were the Braxton Hicks that I hear other pregnant women complain about.

I grabbed my smartphone and timed them, just to play with a new app I had downloaded. They lasted about 45 seconds, were more of a nuisance than real pain, and were very varied in frequency. Still, I called my doctor. They were concerned about Liam's size, since he was measuring in the 10th percentile on repeated growth ultrasounds. They told me it could be false labor, or early stages of labor, but that I didn't need to come in until they were consistently four minutes apart.

I drank a large glass of water and ate some toast, then began to pace my apartment. As I walked, they contractions became even further apart. Around 11 p.m., I laid down to get some sleep before work the next day.


About half an hour later, they were back, more frequent and more painful. I timed them again, and they were consistently 2 minutes apart. I felt silly calling the hospital back. Finally, as it became harder to talk through the contractions, The Mister made the "executive" decision that I was going to the hospital to get checked out.

We arrived around 12:30 am (after valet hours), so we had to park in the garage and walk across the street to the E.R. The Mister offered to drop me off at the door, but I didn't want to be separated from him. I was afraid he wouldn't be able to find me. They waved me through the security screening, and I told the triage nurse that I thought I might be in labor. They called for a wheelchair and whisked me up to the L&D evaluation area.

I was given my own L&D room around 2:00 a.m. The doctor on-duty came in to introduce himself and his intern, and it turned out to be my own perinatologist! It was nice to see a familiar face.

I had requested to have an epidural, and was told the anesthesiologist was in a C-section, but was just finishing up. She arrived around 3:00 a.m., but had some concerns about my past problem with blood clots. She wanted a blood test to make sure my clotting levels were normal (so I wouldn't either clot, or bleed out from the placement), but the IV that had been placed in the evaluation unit had blown (no, it's not painful when that happens). While the doctors and nurses were having a mini-conference in the hallway to decide on the next course of action, I felt PRESSURE and yelled for help. The Mister ran to the door to call for a nurse, who came in, saying, "It's not time to push yet, you're only 4 centimeters, you've got hours to go."

The doctor came in and checked me, turned to the residents and nurses and said, "This baby is coming now." I remember him saying to me, "I'm sorry, there's no time for pain medication." I remember telling him that wasn't an option. But the bed was already apart and I was already in position to push. It took about four contractions and twelve pushes to get him out. I remember a nurse saying he had a head of dark hair like his daddy. All I remember thinking was how purple he looked. But he let out a loud wail, and I just burst into tears. 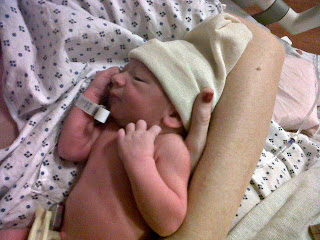 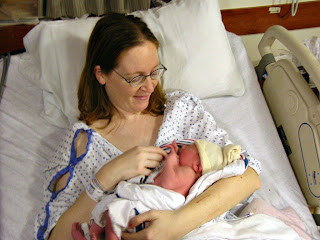 Liam, all 5 pounds 15 ounces of him, came storming into the world on his own terms (in just 6 hours of labor) at 3:54 a.m., and he has taken that same approach his whole first year of life. I can already see his independent streak, from not wanting to be spoon-fed, to not wanting help cruising around the furniture.

It's amazing to see him do new things and discover new abilities. I've seen his first smile, saw him roll over, saw him crawl, saw him cruise. He hasn't taken his first step yet, but he's so close. He babbles (constantly!), and we're pretty sure "duh-duh" means "doggie."

His smile makes my heart melt, just as he does when he lays his head on my shoulder and squeezes his arms around my neck while I hold him and sway with him before laying him down for the night. He also just started giving "kisses."

I'm proud that we made it to one year breastfeeding, and I plan to continue for the time being, at least first thing in the morning and at night. I chose to try breastfeeding because it was free, but it became a very special bonding time for us, and I cry at the thought of stopping (and I'm sure he would cry if we stopped, too).

I get choked up when I think that he's no longer a baby (though he will always be MY baby). But I'm excited for the new things he'll learn, friends that he'll make, and even for the challenges ahead.