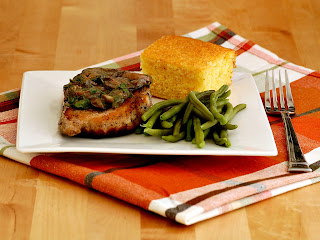 With Liam getting especially clingy in the late afternoon, and me being adamant that we eat dinner as a family, I've been choosing most of our week's meals from the "Weeknight Meals" or "30 Minute Meals" sections of the magazines that I buy.

I found it a bit funny that this dish caught my eye because of the cornbread — which wasn't even part of the recipe! I mean, I love pork and mushrooms, otherwise I wouldn't have made the recipe, but it also gave me an excuse to eat cornbread!

I feel I should confess that the cornbread came from a mix, and it was better than any cornbread recipe I've ever tried. It was sweet and moist and I almost ate the whole pan by myself. YUMMY!!

The pork chops with mushroom gravy was tasty as well. The sauce didn't thicken while cooking as much as I thought it would, so I let it cook longer than the instructions stated. However, it did thicken upon standing while I finished the green beans and sliced the cornbread, so it wasn't necessary, and isn't reflected in the instructions below.