My little peanut isn't exactly a peanut anymore. He turns 1 year old tomorrow (?!?). But I'll save the mushy, sentimental stuff for then.

We chose to celebrate his birthday the weekend before, rather than try to cram another thing into a holiday weekend. The theme — sock monkeys — was pretty easy to chose, because it was one of his favorite toys. In fact, it was his sock monkey toy that elicited his very first giggle.


My parents were kind enough to offer their home for the party location, since our apartment feels crowded with just four extra people over. Plus, our dogs would have gone CRAZY. As our trainer put it, our pit bull suffers from "an over-abundance of friendliness."

The invitations and party printables (Happy Birthday Banner, "I am one!" high chair bunting, food tent cards, and favor tags) were purchased from Designing for Peanuts on Etsy. Her designs are adorable (she has many designs besides sock monkeys), she was very quick in responding to my messages, and very easy to work with. I had the invitation printed through Shutterfly, purchased the envelopes (and sock monkey wrapping paper!) at Paper Source, and had the rest of the files printed at Staples onto 110# cardstock. 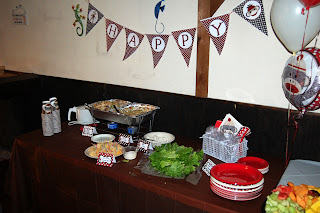 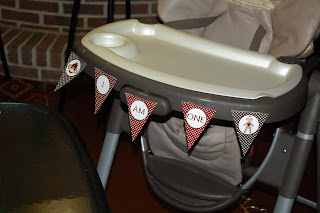 I got sock monkey plates, cups, napkins, Thank You cards, Mylar balloons, and party hats from Birthday Express. They arrived quickly, the order was correct, though their prices are a bit high, considering the plates are rather thin paper, not plastic. But they were pretty much the only place to get sock monkey party goods. We did find red, cream, and chocolate brown balloons at the local dollar store as well. They also agreed to inflate the Mylar balloons from Birthday Express. 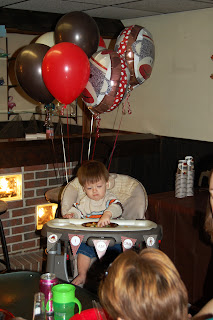 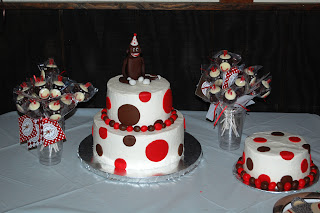 For the cake smash, I didn't want Liam to get buttercream all over his birthday outfit, so I ordered a coordinating diaper cover (not visible), necktie and party hat from Scootapie. Again, her items are adorable, very easy to work with, highly recommended! 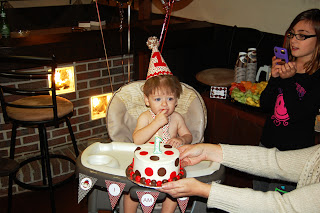 We were so happy to have all of our family and friends there to celebrate the first year of his life!