Lamb korma: lamb shoulder braises in a spicy, creamy sauce with veggies, and is served over Indian rice. 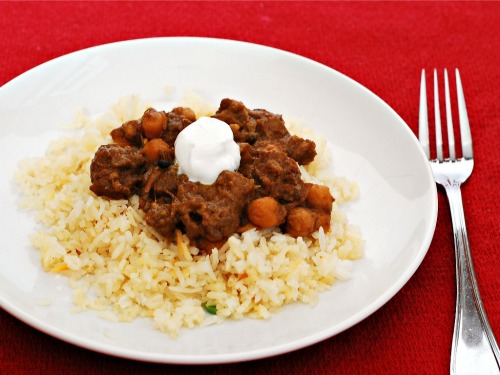 I have tried Indian food at least three times, but was never that happy with the dishes I'd tried (except naan bread — how could anyone dislike naan bread??).

I'm not averse to spicy foods, so it wasn't the heat that bothered me, but I just wasn't a fan of the combination of flavors.

Until last week. At my new office, we all ordered Indian food to celebrate a coworker's last day. I asked someone what they'd recommend to someone unfamiliar with Indian food. They recommended the chicken korma.

As you're probably guessing by this post, I loved it! "Korma" means "to braise," which is when you cook meat by immersing them in simmering liquid. Lamb stew meat that comes from the shoulder area is perfect for this recipe, because it's a tougher meat, which becomes tender with braising. It's not the leanest part of the animal, but it is a more inexpensive cut. The recipe is "bulked up" even more with the addition of chickpeas. 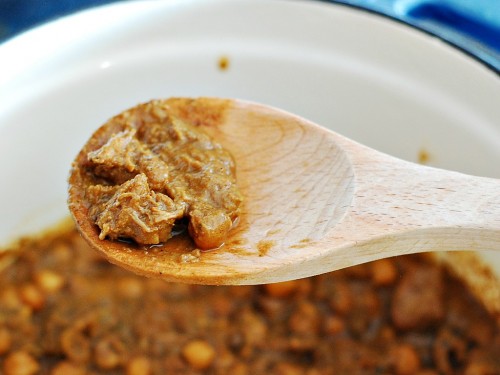 I did laugh a bit because the menu described the dish as "mildly spiced," and in India, it probably is considered mild. It's not make-your-mouth-water spicy, but if even mild salsa is too much for you, this is not the dish for you.

It's served over basmati rice, an Indian variety of long-grain rice, and topped with low-fat yogurt. You could use fat-free if you choose, but the small bit of fat in the low-fat variety helps mitigate some of the heat of the korma.

This braises for a while, so it's not something you can throw together after work. But, you can make it on the weekend, and reheat it after work, because this is one dish that tastes even better the next day! 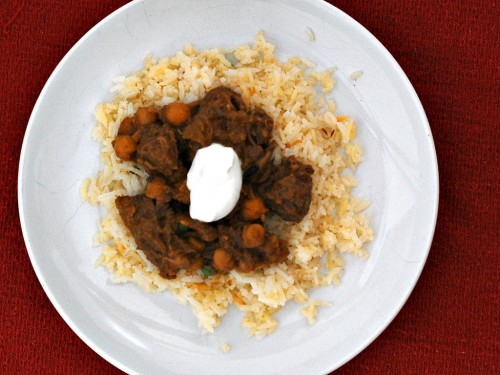