It's been a while since I've written a Munchkin Meals post. The host, Brittany at A Healthy Slice of Life, decided to make it a once-a-month link-up and I skipped last month, due to the craziness of making a wedding cake, a gingerbread house, Liam's first birthday cake and party favor cake pops all in the span of two weeks.

So, Liam is now a little over a year old. He had his one-year well visit last week, and he is 22 lbs 2 ounces, and 2 feet 6.5 inches tall. He waves hello and goodbye when prompted, claps his hands, gestures at things, and cruises around on the furniture. 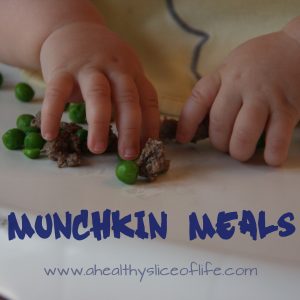 We are still nursing about four times a day (morning, before each nap, and at bedtime). He eats three meals a day, plus two snacks. We're trying to transition from a sippy cup to this Avent training cup:

It doesn't spill when turned upside-down. The center circle creates a seal, but when Liam presses down with his upper lip, the seal is broken and the water comes out.

He's getting better at it. He was very frustrated the first time he tried to use it. We tried again the other day, and I showed him how to take a drink. Unfortunately, he tried to take a drink from the top of the cup (the side further away from his mouth) (he does it with his sippy cup, too) and water went everywhere.

We had gotten into a routine where Liam would wake around 5:45 a.m. The Mister would bring him to me to nurse in bed. When Liam was done, The Mister would get up and cook breakfast for the both of them (sometimes scrambled eggs or a veggie omelet, sometimes a waffle and fruit), then he'd get me up to play with Liam while The Mister got ready for work.

I don't know if he's adjusting to the Daylight Savings change, or if it's because he's getting older, but Liam has been sleeping later. He now gets up between 6:30 and 7:00 a.m, which means he eats breakfast with me instead. I typically make him a waffle with fruit, because Liam doesn't like the way I cook his eggs. He never eats them; he drops them over the side of the high chair for the dogs. Hmmph. 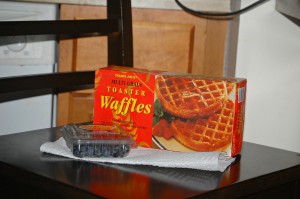 His morning nap is getting shorter, and his afternoon nap is getting longer. I still nurse him about two hours after he wakes in the morning and lay him down in his crib for about 20 to 30 minutes of down-time (for BOTH of us!). I get some work done, or snap some pictures for the blog. Who am I kidding? I cruise Facebook.

Then he's up again, and eats a snack: whole wheat toast with peanut butter; graham crackers and fruit; or whole grain cereal and fruit. 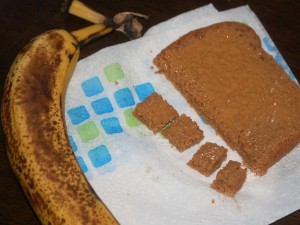 Peanut butter toast and a banana

At this point, we either play or run errands. He got a Playskool guitar for his birthday, which he loves. Or I'll build towers out of blocks and he'll knock them over. Just the other day, he would crawl away from me, then stop, look back at me and laugh. I figured out that he wants me to chase him. He loves this game! And he's so close to walking. He pulls up on furniture and turns around to face me. Sometimes he'll let go and stand on his own for several seconds, other times he immediately drops to his knees.

Lunch usually consists of veggies and a sandwich. His favorites are grilled cheese; turkey and cheese; or tuna fish and cheese. Sensing a theme here?

Speaking of dairy, I'm trying to get him to drink a cup of whole cow's milk. I'm not planning on weaning any time soon, but I'm trying to get a full-time, work-in-an-office job (or even still working from home, but Liam would still have to go to daycare). I no longer get any milk when I pump so I'd want him to drink cow's milk at daycare and nurse at home. I have no frozen stash of breastmilk to mix with cow's milk, so I'm willing to listen to any tips you may have for me!

Between 2 and 3 p.m., Liam takes his second nap. This is the long one, usually 2, sometimes even 3 hours. This is when I work on large projects for work, prep dinner, and/or bake for the blog.

After he wakes, he'll have a small snack, a handful of cereal or baby puffs, just something small to tide him over until dinner.

For dinner, he eats whatever we eat. The past couple of nights, he's eaten shrimp alfredo; steak and roasted asparagus; butternut squash ravioli; pork chops, green beans and cornbread; and chicken quesadillas. 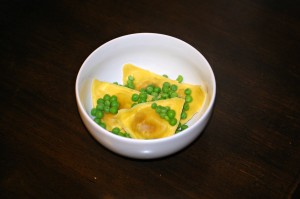 Everyone has warned me that any day now, he'll refuse any and all food. I'm not saying they're wrong, but he's still putting away massive amounts of food, and eats everything put in front of him. At Thanksgiving, he ate almost as much as I did (turkey, stuffing, mashed potatoes, sweet potatoes, butternut squash, corn, and half a biscuit). So, until that day comes, I'm still offering him a wide variety of tasty, healthy meals.