Craving a taste of autumn in the summer? Pumpkin gelato with salted caramel tastes like frozen pumpkin pie! 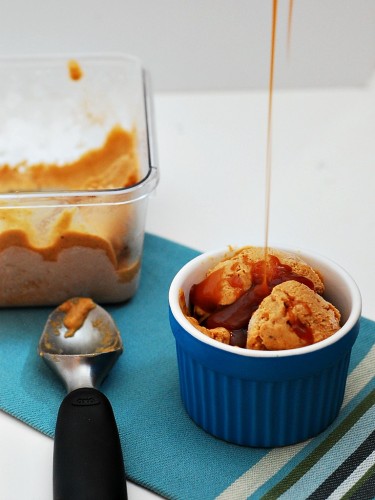 Welcome to Day 3 of Ice Cream Week 2014! This year the event is hosted by Kim of Cravings of a Lunatic and Susan of The Girl in the Little Red Kitchen. We have teamed up with 25 amazing bloggers to treat you to tons of amazing ice cream recipes. Ice Cream Week is shaping up to be the best week ever!

So, a few days ago, I posted a poll on my Facebook page, asking when I should start posting pumpkin recipes: now, on September 1st, or September 23rd (the first day of autumn). More than half of the responders voted for now, but quite a few said not until autumn. I thought this recipe was a nice compromise — a summer dessert (ice cream) with the flavors of autumn.

I'm sure you know that gelato looks, well, exactly like ice cream. Same thick, creamy texture. So, how are they different? According to Serious Eats, the three main differences are fat (ice cream is mostly heavy cream and egg yolks while gelato uses mostly milk and fewer, or no, egg yolks); commercially-made ice cream has more air churned into the ice cream than gelato (this is achieved through the speed at which the mixture is churned); and finally, gelato is served at a warmer temperature than ice cream. Since gelato has less fat and less air, it turns into a frozen solid brick. 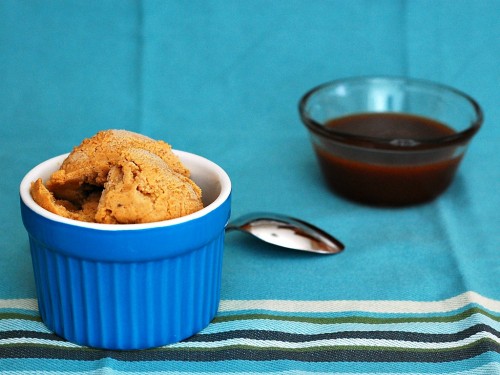 Adding the brandy to the gelato is completely optional. Such a tiny amount doesn't alter the flavor; it's main purpose is to prevent the gelato from freezing solid. The resulting gelato really tastes like frozen pumpkin pie.

The warm salted caramel turns chewy when it hits the frozen gelato. I'm a big fan of summer, but after eating this gelato, I'm starting to look forward to fall!

For the salted caramel

Adapted from Saving Room for Dessert and Sally's Baking Addiction 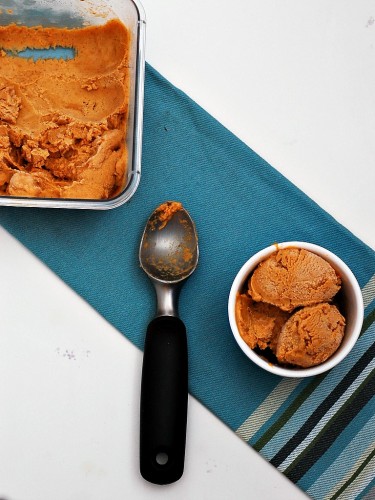 Be sure to swing by all of today's Ice Cream Week Participants:

Disclaimer: I was not compensated monetarily or with any product(s) for participating in this blogging event. The #IceCreamWeek Giveaway is open to U.S. and Canada residents only. ONE winner will receive ALL the prizes listed. Giveaway ends at midnight on August 31st. See official giveaway rules here.