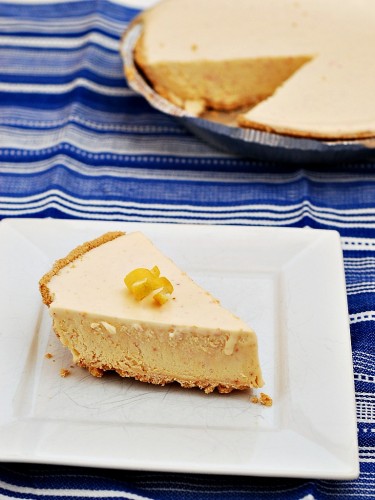 Welcome to Ice Cream Week 2014! This year the event is hosted by Kim of Cravings of a Lunatic and Susan of The Girl in the Little Red Kitchen. We have teamed up with 25 amazing bloggers to bring you ice cream treats all week long. I hope you have as much fun as we did. Break out those stretchy pants and celebrate Ice Cream Week with us!

To kick off Ice Cream Week, and since today happens to be National Ice Cream Pie Day, I made a no-churn ice cream pie. Lemon juice and zest give intense lemon flavor, and raspberry puree adds a sweet contrast.

The recipe starts off similar to "real" ice cream, with cooking egg yolks over a double boiler. However, instead of churning, you fold in whipped cream before freezing the mixture. By making the ice cream this way, it doesn't freeze as hard as regular ice cream, so it's ready to slice and serve straight from the freezer.

We thought this was a really refreshing summer treat. The creamy sweet-tart ice cream contrasted with the slightly salty, crunchy graham cracker crust. And we didn't feel full and heavy after eating a not-so-small slice. 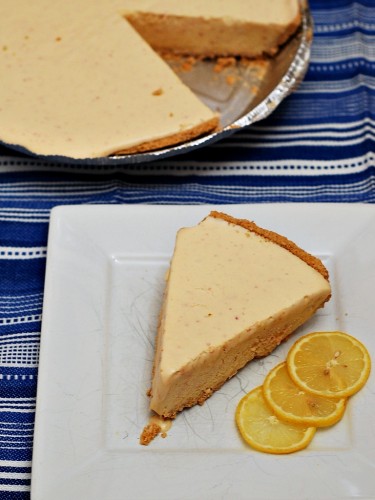 Make sure you swing by for a scoop from each of today's Ice Cream Week Participants:

Other Blogs participating later this week:

Special Guest for the Week is Lindsay Clendaniel of the blog, Scoop Adventures. We're very excited to have her join us. Lindsay is the author of Scoop Adventures which is chock full of ice cream goodness.

Disclaimer: I was not compensated monetarily or with any product(s) for participating in this blogging event. The #IceCreamWeek Giveaway is open to U.S. and Canada residents only. ONE winner will receive ALL the prizes listed. Giveaway ends at midnight on August 31st. See official giveaway rules here.