Treat yourself to an indulgent breakfast: rich French toast topped with blackberry sauce! Garnish with a dollop of whipped cream or a sprinkling of confectioners sugar. 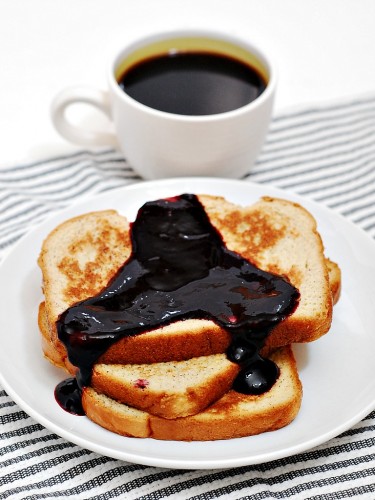 Child-free mornings are meant for indulging: extra sleep, and leisurely, "grown-up" breakfasts. What's a grown-up breakfast? Pretty much anything that takes longer than 30 seconds in a microwave to cook.

Normally, we go out for brunch when Liam spends the weekend with his grandparents. But as I'm between contract jobs, we opted to cook a special breakfast at home: French toast with blackberry sauce.

The blackberry sauce mostly came about because we had a package in the fridge that needed to get used up. I had intended to leave it on the "chunky" side, with bits of whole blackberry in it, but when I squeezed the lemon juice into the sauce, a lemon seed found its way in, so I had to strain the whole mixture to get it out. 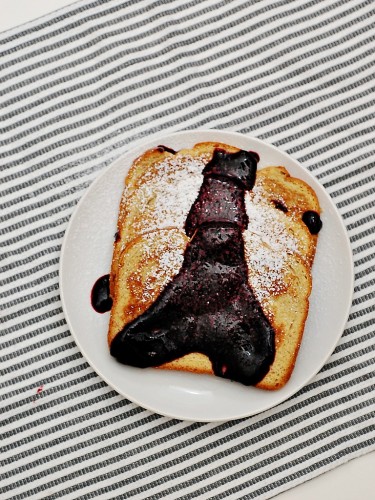 This was such a treat. Typical breakfasts lately have been a cup of coffee, and whatever I could grab in between making Liam's breakfast, getting Liam ANOTHER cup of milk, stopping the dogs from eating whatever bits of breakfast Liam drops in his lap, turning on an episode of Thomas the Tank Engine for Liam, need I go on?

There was a bit of leftover blueberry sauce after all the French toast had been eaten, and it solidified into jelly when refrigerated, which was delicious when smeared on a slice of regular toast.

Bonus? Any leftovers freeze beautifully, and cook up in less than 30 seconds in the microwave for when the toddler comes back home. 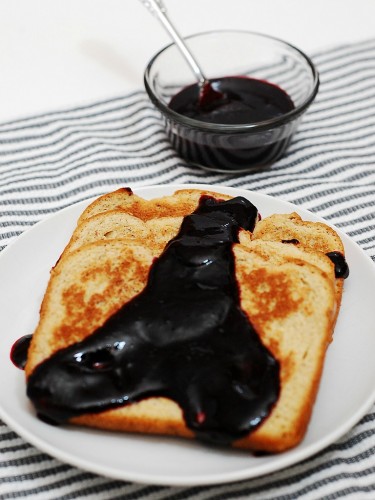 For the blackberry sauce

For the French toast