Plums contain lots of natural pectin, so making preserves is easy! Vanilla-plum preserves make a delicious topping for your breakfast! 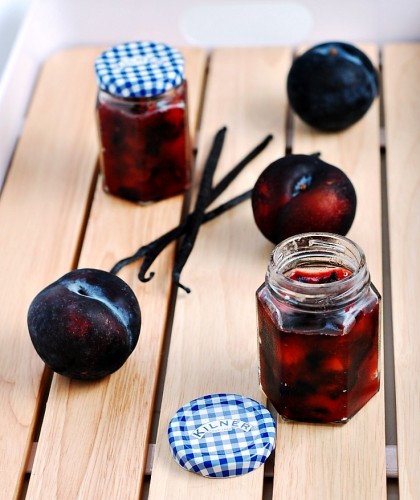 I first heard about these vanilla-spiced plum preserves YEARS ago in an issue of Food Network Magazine. I saved the recipe, and have been dying to make it ever since.

That said, I'm a little intimidated by canning. And I was hesitant to invest money in all the necessary equipment. So, it's been filed away ever since, gathering dust.

I had a few jars here and there, but they were meant to hold small batches of homemade condiments and spice mixes; they were not suitable for canning. I featured one of those Kilner jars in my Homemade Sriracha post, and the distributor of those jars, Pacific Merchants, contacted me to offer a gift card to give away to my readers. 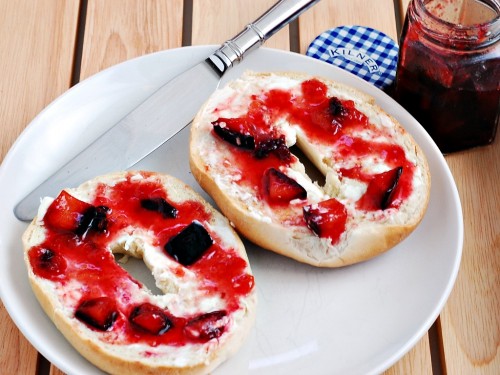 I was trying to decide what to make in conjunction with the giveaway that could feature one of their products. That was when I discovered that if you plan to consume preserves relatively soon after you make them, you don't NEED to go through the canning process!

A non-canned batch of preserves will last about 3 to 4 weeks in the refrigerator. This recipe makes about a cup. I use about two tablespoons per bagel, or per two slices of toast, so this will last me through 8 breakfasts.

These preserves were so tasty, I want to make another batch (and maybe I'll finally jump into canning, so I can make a big batch!). I thought they would be tart, but they were just the right amount of sweet. I loved the subtle vanilla aftertaste. 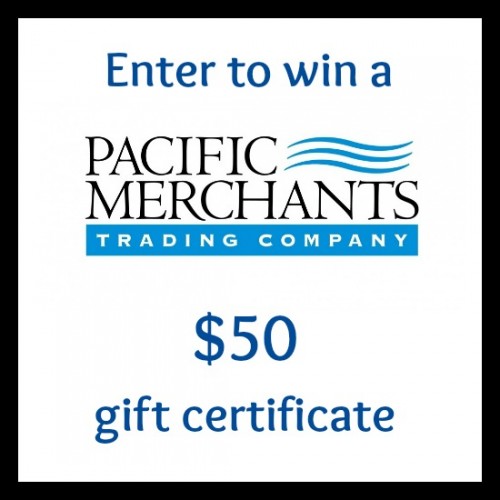 Pacific Merchants has offered a $50 gift certificate to one lucky reader of The Redhead Baker. Not into canning? Pacific Merchants sells so much more! Acacia wood serving bowls, trays and utensils; fermenting crocks; placemats; and more! If you're interested in cooking (which you probably are if you read my blog), then there's something for you.

Simply scroll down to the bottom of this post and enter to win! The only required entry is to leave a comment on this blog post; all others are optional, but provide you with additional chances to win!

In addition, anyone who reads this blog can get 15% off their purchase at PacificMerchants.com by using the code Redhead15! 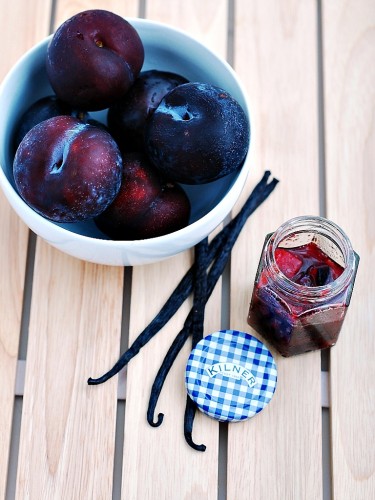 Disclosure: Pacific Merchants is supply the $50 gift certificate as prize for this giveaway. I was not compensated with cash or products for conducting this sweepstakes.