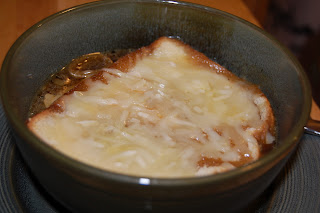 I tend to be picky when it comes to soup, which is precisely the reason I signed up for this round of the What's Cooking board recipe swap. I thought it would force me to try something new.

Instead, I received a recipe for French Onion Soup from Colleen's Kitchen Therapy, which, aside from my creamy pumpkin soup, is one of my favorite soups! I've never made it at home, though, so I was still very excited.

The recipe did not disappoint! It tasted just like the French onion soup at my favorite diner, The Great American (locations in Bensalem and Langhorne, PA). Definitely don't skip the brandy in this recipe. I'm not a fan of drinking straight brandy, but it really complements the beef broth in the soup.