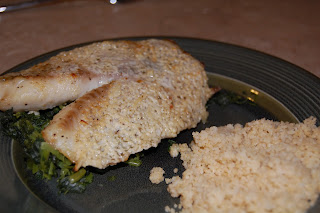 Whenever we do a recipe swap, I look at the other recipes that were swapped, and bookmark the ones that I'm interested in trying later. From the fish swap in September 2011, I bookmarked Parmesan Tilapia. It sounded quick and easy, and used ingredients that I almost always have on hand. And this week, a 2-lb bag of individually frozen tilapia filets was on sale at the grocery store.

Obviously, having bookmarked the recipe, I was pretty sure I would like it. But I was pleasantly surprised by how much I liked it. It was tangy and very flavorful. I served it over chopped kale, with a side of whole wheat cous cous.

Parmesan Tilapia
Recipe from The Cookaholic Wife, who adapted it from Mrs. B Cooks