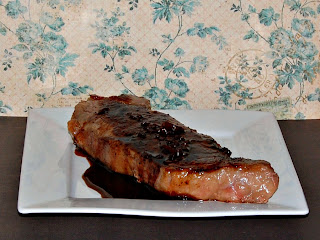 Until I entered culinary school, pomegranates were a story from a Greek myth — from Wikipedia:

"Persephone was kidnapped by Hades and taken off to live in the underworld as his wife. Her mother, Demeter (goddess of the Harvest), went into mourning for her lost daughter and thus all green things ceased to grow. Zeus, the highest ranking of the Greek gods, could not allow the Earth to die, so he commanded Hades to return Persephone. It was the rule of the Fates that anyone who consumed food or drink in the Underworld was doomed to spend eternity there. Persephone had no food, but Hades tricked her into eating six pomegranate seeds while she was still his prisoner and so, because of this, she was condemned to spend six months in the Underworld every year. During these six months, when Persephone is sitting on the throne of the Underworld next to her husband Hades, her mother Demeter mourns and no longer gives fertility to the earth. This became an ancient Greek explanation for the seasons."

As far as I knew, pomegranates were a mythical fruit themselves (I was a "book-smart" kid, not so much a "common sense" kid). Then I entered culinary school, and came face-to-face with a real pomegranate. I tasted the pomegranate seeds, and I loved the tanginess. I make an effort to try many dishes, both sweet and savory, that include pomegranate in some way.

To be honest, making the recipe as-written, the pomegranate flavor wasn't that strong. However, I chose to blog about this, because even though the flavors weren't what I was hoping for, the dish was still delicious. I may try the recipe again, doubling the pomegranate juice and omitting the wine.