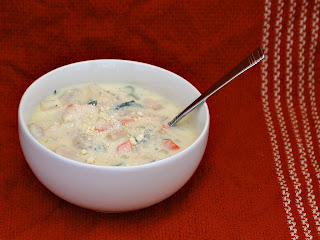 Growing up, I was a chicken noodle soup girl. I wouldn't touch anything else. After a long day outside in the snow, going sledding, building a snowman, and having a snowball fight, I came home to a hot bowl of chicken noodle soup and a grilled cheese sandwich. My brother always had tomato soup. I still can't stand the smell of it. Tomatoes and I have a spotty history.

It wasn't until I was in my early 20s and discovered my love of all things pumpkin that I tentatively branched out and tried new soup flavors. I discovered not only pumpkin and squash soups, but New England clam chowder, cream of mushroom soup, and Italian wedding soup.

So, early this fall, I set out to browse blogs and pin soup recipes that sounded appealing. One recipe that got pinned has been making the rounds of my fellow What's Cooking Swap bloggers. It's a make-at-home version of an Olive Garden soup, Chicken Gnocchi Soup.

I have never eaten it at The Olive Garden, so I can't compare the original to this version, but I can tell you that I loved this soup. It's thick, creamy, and loaded with vegetables. Temperatures in my area have barely reached the 50-degree mark lately, and this soup warmed us all up. One previous blogger preferred to add pasta rather than gnocchi, finding the gnocchi too heavy, but I liked it in the soup.