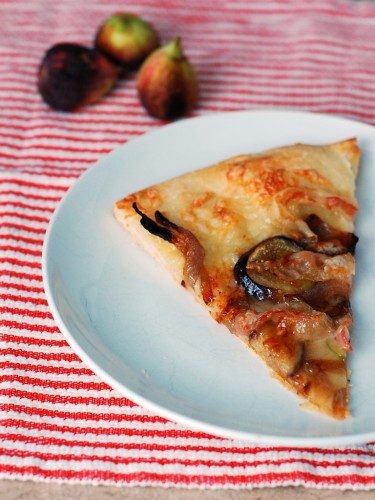 Figs are one of those ingredients that I grab when I see them at the grocery store, and figure out what I'm going to do with them later.

I saw them at Trader Joe's while I was on The Quest for the Elusive Red Chile Pepper (read more on that this coming Wednesday): a pound of fresh black figs. I didn't find my chile peppers, but I bought those figs.

Most recipes for figs involve roasting them, wrapping them in pancetta, or eating them with goat cheese or honey. Last year, I made a cake, and a salad with figs. They were delicious (especially the salad!), but this time, I wanted to do something different, so I put them on a pizza. 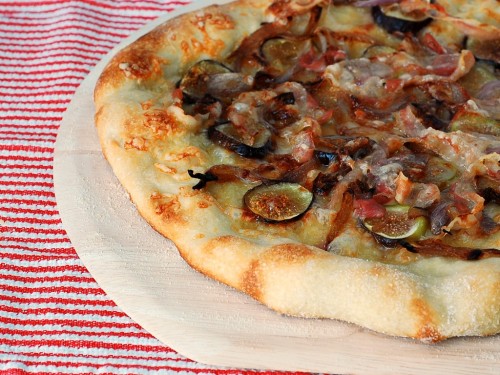 I decided to pair them with pancetta, since everything is better with pancetta. But I also wanted something else savory to balance the sweetness of the figs. I chose to caramelize a red onion. Why red? Because that's what I had in my cupboard.

At the last minute, I added some chopped fresh rosemary. Ever since I tried the three-cheese, rosemary and pepperoni pizza from Smells Like Home, I've believed that every pizza should include rosemary. Did I mention I like rosemary?

Dave declared the results delicious, and I agreed. Liam? Not interested in tasting figs. He scraped everything off his slice of pizza, and pretty much just ate baked pizza dough. Oh well. More pizza for us. 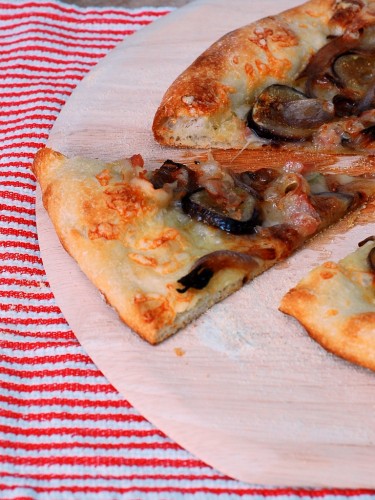