These adorable ice cream sundae cupcakes look like the real thing, but won't melt in the summer sun! Perfect for barbecues, potlucks and picnics! 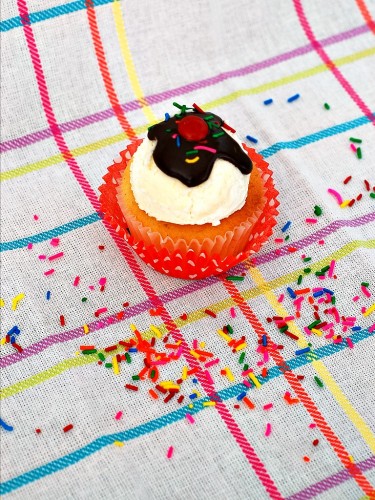 It's (unofficially) summer time again, and time for barbecues, potlucks and picnics.

If I'm bringing a dish, I almost always bring a dessert. I try to bring something different from the standard brownies or cookies.

While searching Pinterest for "summer cupcakes," I found Love From The Oven's Ice Cream Sundae Cupcakes. They were so cute! They look like ice cream sundaes, but won't melt. 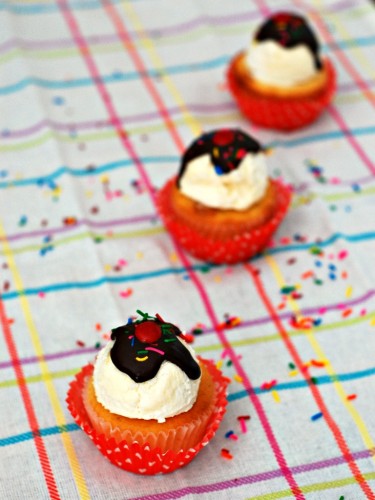 I brought these to a potluck work lunch, and they were a huge hit. Some people even thought the icing really was ice cream.

Feel free to use your favorite flavor of vanilla cake. I've included the recipe for the frosting I used below. The key is to not whip too much air into the frosting, and to chill it before scooping it onto the cupcakes.

These were really the easiest cupcakes I've ever made. No piping bags or tips to deal with, no technique involved. I think the part that took the longest was picking the red M&M's out of the bag.

As you can see in the photos, I "double-papered" my cupcakes. I baked them in white paper liners, then placed the baked cupcake (white liner and all) in a decorative liner. This is just in case the melted chocolate drizzled all the way down over the edge of the cupcake — no mess! 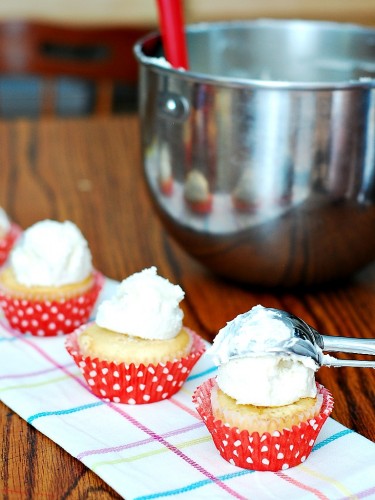