Time for another Munchkin Meals, hosted by A Healthy Slice of Life!

Wow. 19 months. 19 and a half months, actually. He's been "promoted" to the Older Toddlers room at daycare (at daycare, the toddlers are divided into groups of 12 to 18 months and 19 to 24 months). 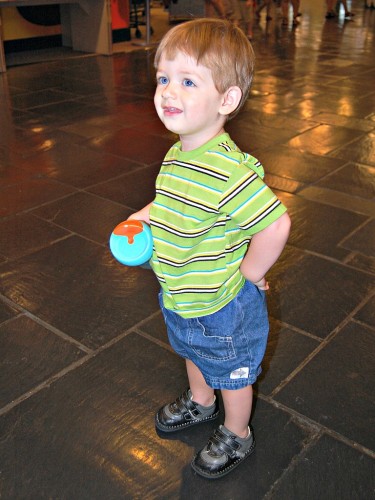 He continues to seemingly subsist on air, as most toddlers do. I'm thankful that I read about this phenomenon in Baby 411 before we got to this stage, because otherwise, I'd be seriously worried.

He drinks a cup of milk in the morning before daycare. Sometimes, he'll want a little bowl of cereal: half to eat, and half to dump on the floor for the dogs. If he's REALLY hungry, he has fruit with his cereal: blueberries, strawberries, grapes, etc. So help you god if you dare to cut the fruit in any way. He won't touch it. On the weekends, he'll eat a whole grain or blueberry waffle (sometimes 2).

Speaking of cereal, he started to refuse Cheerios (I guess he was getting tired of them?). Instead, he has started eating my Cinnamon Toast Crunch (one of my indulgences). In fact, I was at work one day during Dave's week of vacation, and I got a picture message: 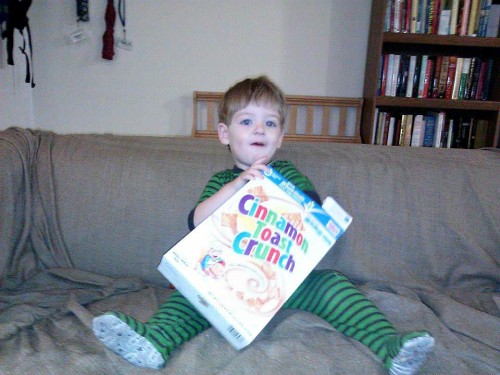 No, he doesn't eat this every day. We try to keep his food as healthy as possible, so a little treat now and then won't hurt him.

He eats two snacks plus lunch at daycare. We get daily emails recapping what he ate, what he did in "school," and how he napped. We continue to be amazed by what he will eat at daycare vs. at home.

At home on the weekends, he eats Trader Joe's baked chicken drumettes or fish sticks, or Annie's Mac and Cheese, with a cup of whole milk. He will sometimes eat some fruit with it, like a slice of cantaloupe or mango. Other times, he'll eat a cup of fruit-flavored yogurt. His favorites seem to be peach and mango.

He rarely eats dinner with us. At this age, it's not the worth the battle to get him to sit down for a meal, because for one thing, he's never hungry at dinner time, and 2) toddlers want to explore!

For the most part, we eat our dinner after he goes to bed. Sometimes, most often on the weekends, he'll be awake when we are eating, and on rare occasions, wants to taste what we're eating. He surprised us by eating half of an appetizer-sized spanikopita triangle.

In non-food-related toddler news, Liam is talking up a storm. We understand maybe 25% of what he says. His favorite song is "The Itsy Bitsy Spider," and he will applaud you when you finish singing it for him. His favorite song to sing himself is the ABC's. He sings A, B, C, D, and makes up the rest.

What makes me a little sad is that one of his newest words is "Baby." He loves babies. He waves hello to them when we're running errands. He points them out on billboards, and on TV. I almost went to hug him and apologize that his baby brother wasn't able to come home.

His independent streak also continues. He wants to wash his own hands, open the refrigerator himself, and forget riding in the shopping cart — he wants to walk. In the direction that HE wants to go. Oh, you had groceries to get? Too bad!

We're also currently experiencing the 18-month sleep regression. Liam does not want to go to bed at night. If anyone has any tips on dealing with this, please leave me a comment!

If it sounds like I'm complaining, please know that our good times with Liam outnumber the bad. We took a trip to the Philadelphia Zoo on the morning of the Fourth of July, and had a fantastic time. Liam is a sweet, affectionate, smart little boy, and we are so lucky to have him! 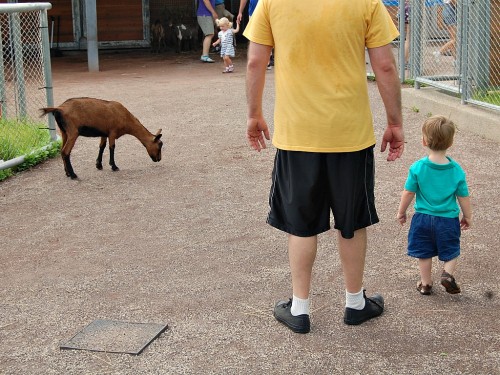