Pumpkin cinnamon rolls are a delicious way to start a fall morning! Sweet dough is flavored with pumpkin, rolled with a cinnamon filling, and topped with cream cheese drizzle. 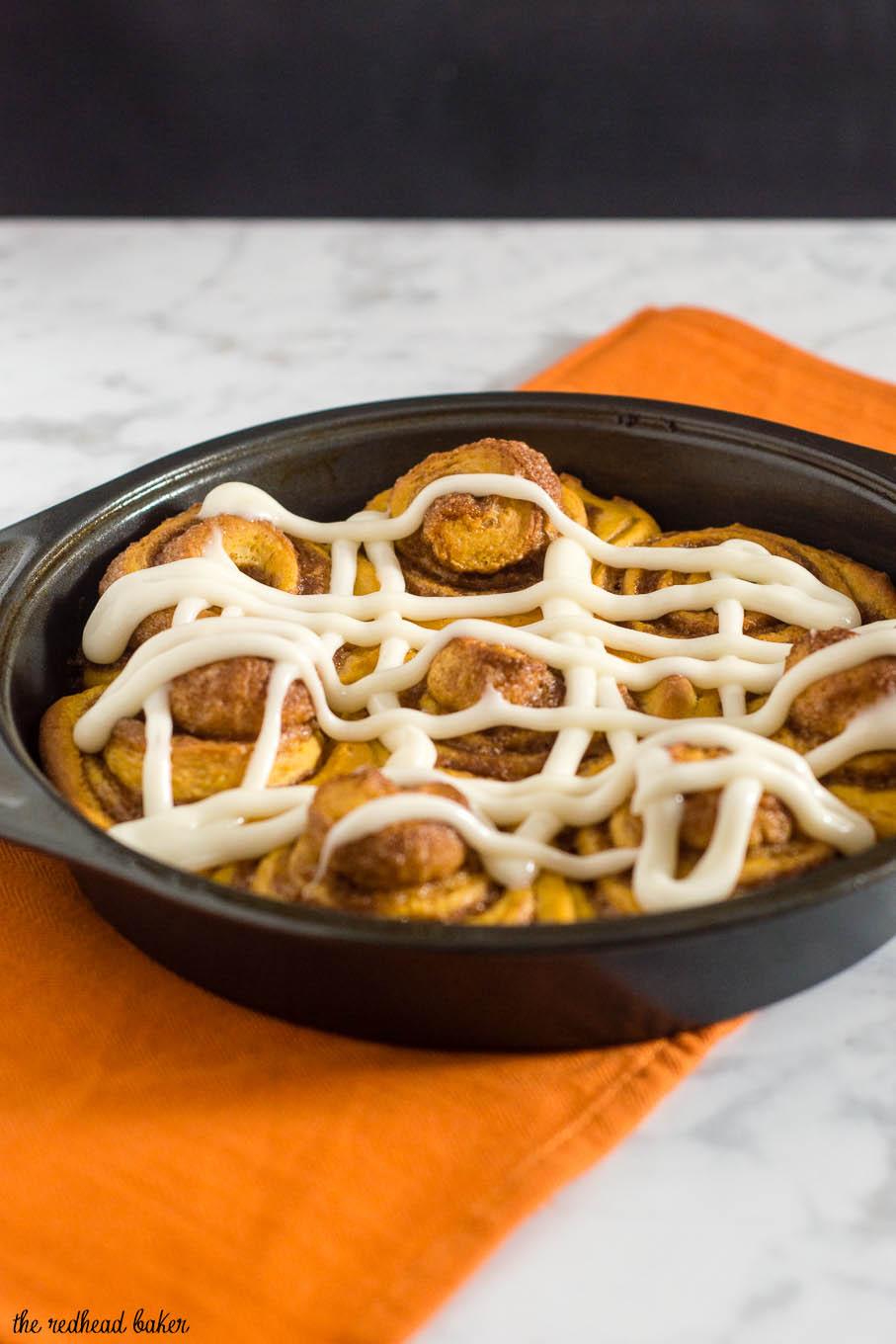 Welcome to Day 2 of #PumpkinWeek, hosted by Terri of Love and Confections! After you check out my pumpkin cinnamon rolls, don't forget to scroll down to the bottom of the post for links to more pumpkin-filled recipes by other bloggers.

I am a sucker for just about all sweet breakfast foods: pancakes, French toast, croissants, muffins, etc. But I can never pass up a cinnamon roll. For some reason, cinnamon rolls are a "special occasion" food for me. Possibly because growing up, we always had cinnamon rolls on Christmas morning while we opened our gifts.

Even though I've learned how to make them, I still save them for special occasions. This pumpkin version would be delicious on Thanksgiving morning, or any fall occasion, special or not. 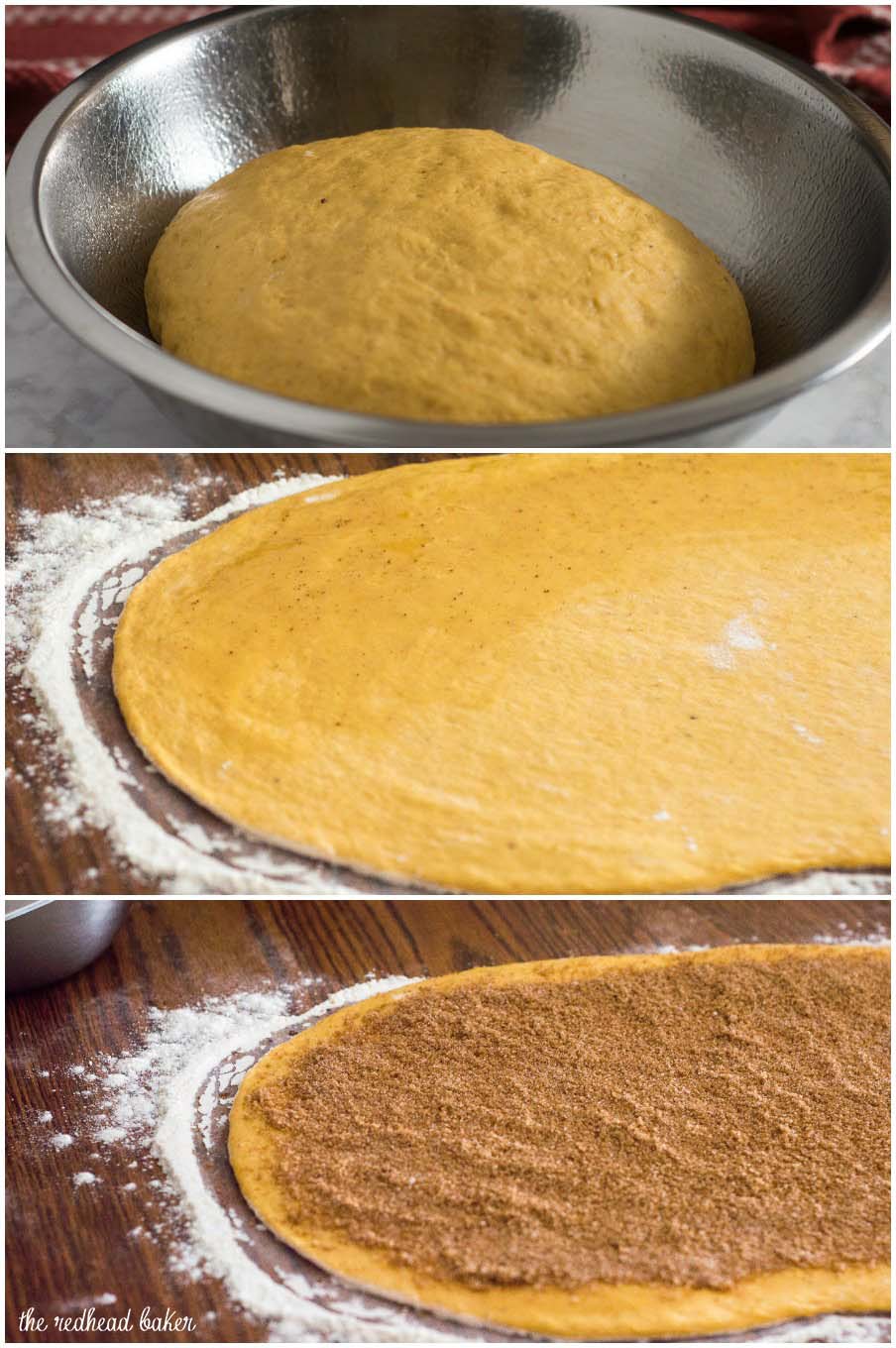 Many people are intimidated to work with yeast at home, but it's really not a big deal. I recommend that first-timers use a thermometer to ensure their warm liquid is neither too cold (which will fail to activate the yeast) or too hot (which will kill the yeast). As long as your liquid temperature is right, and you're not using old yeast (which may have died), you should be good to go.

Another part that gets people intimidated is kneading. If you have a stand mixer with dough hook attachments, it will do all the work for you. However, I find kneading by hand relaxing. How do you know when you're done? Under-kneaded bread is lumpy. Properly kneaded bread is smooth. You can also try poking the dough: gather the dough into a ball and firmly poke it with one finger. If the dough bounces back to fill in the poke, you're done. If it stays a deep dimple, keep kneading. A third test is called the "window pane test." Tear off a small ball of dough, about the size of a golf ball. Stretch it into a thin sheet. If the sheet tears quickly, keep kneading. If the dough forms a paper-thin sheet you can almost see through (ie, a window pane), you're done. 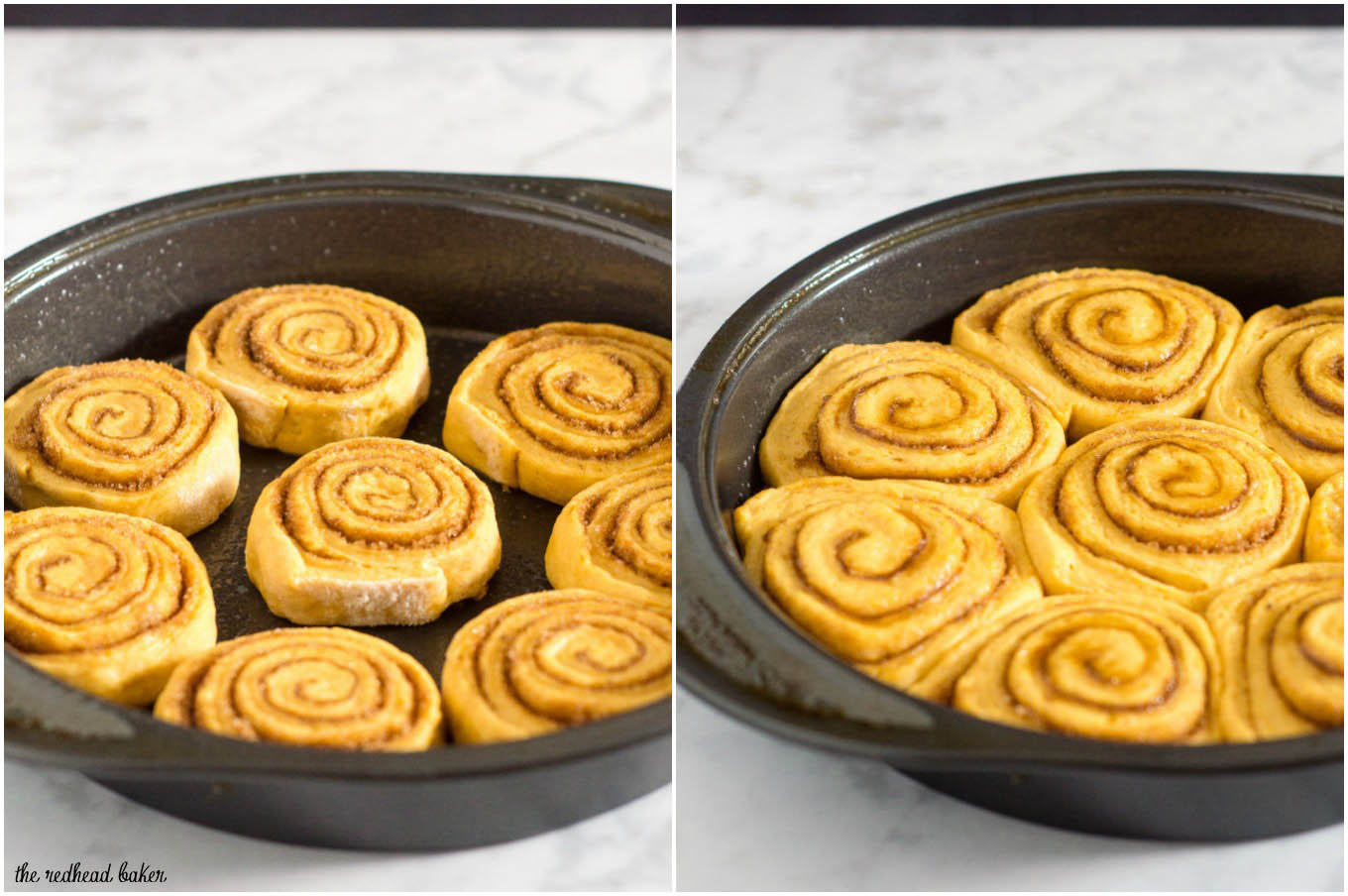 After the dough rises, punch it down. Not literally, really. Poke it with your fingertips until it deflates. Then roll it out. The measurements given below are a rough guideline. Aim for those measurements, but you don't need to be so precise that you need to break out the measuring tape.

The more important thing is that you cut the rolled log into 18 roughly equal pieces, which ensures that you end up with evenly baked cinnamon rolls. If you cut some thin rolls and some fat rolls, you'll end up with some rolls either undercooked or burnt. 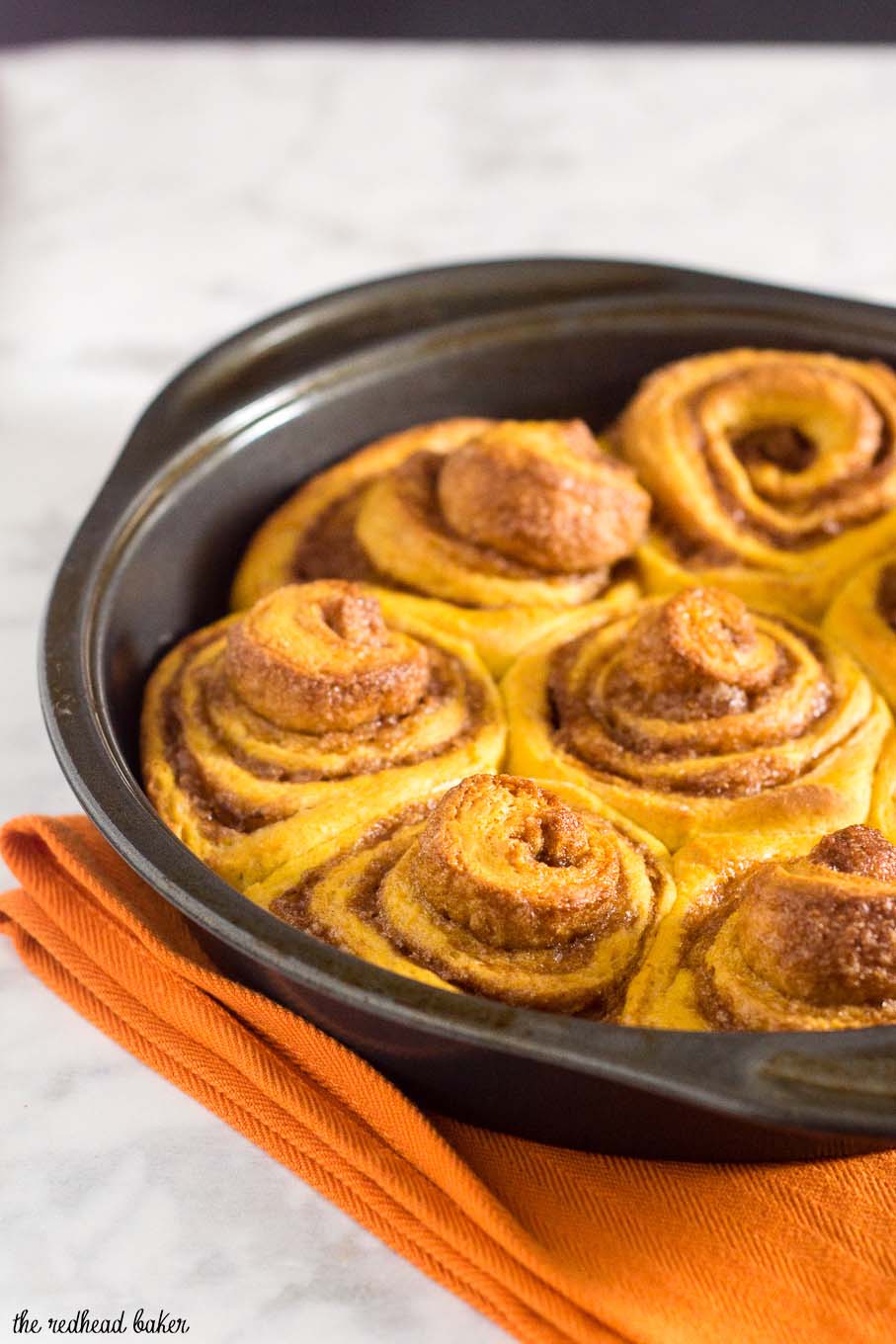 The recipe for icing on these pumpkin cinnamon rolls calls for maple extract, which I know most people don't keep on-hand. If you want maple icing but don't have the extract, you can substitute an equal amount of pure maple syrup (not pancake syrup) for the milk, and use vanilla extract instead of maple extract for a similar flavor. If you'd rather have plain cream cheese icing, use an equal amount of vanilla extract in place of the maple.

Pin this recipe for Pumpkin Cinnamon Rolls for later! 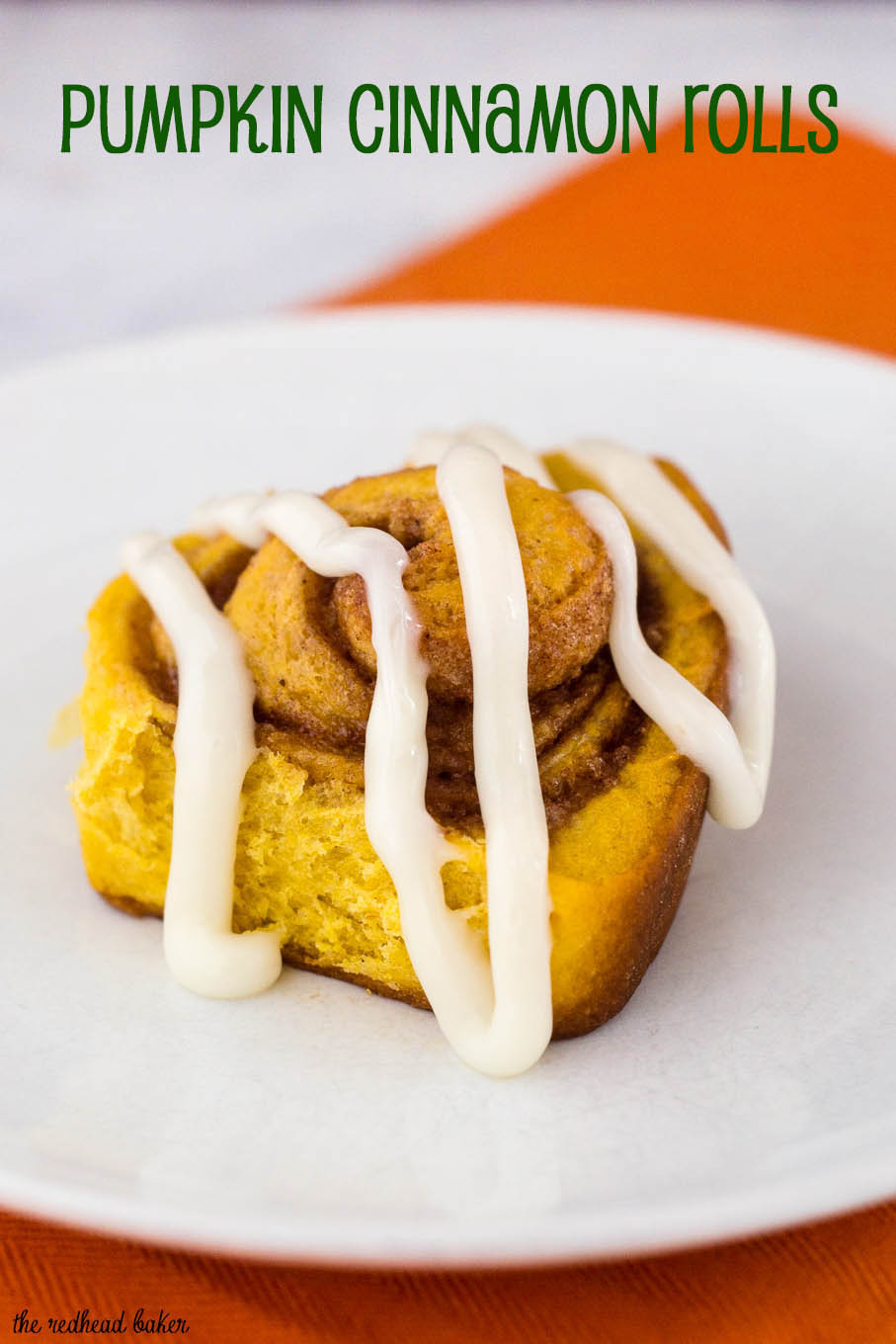 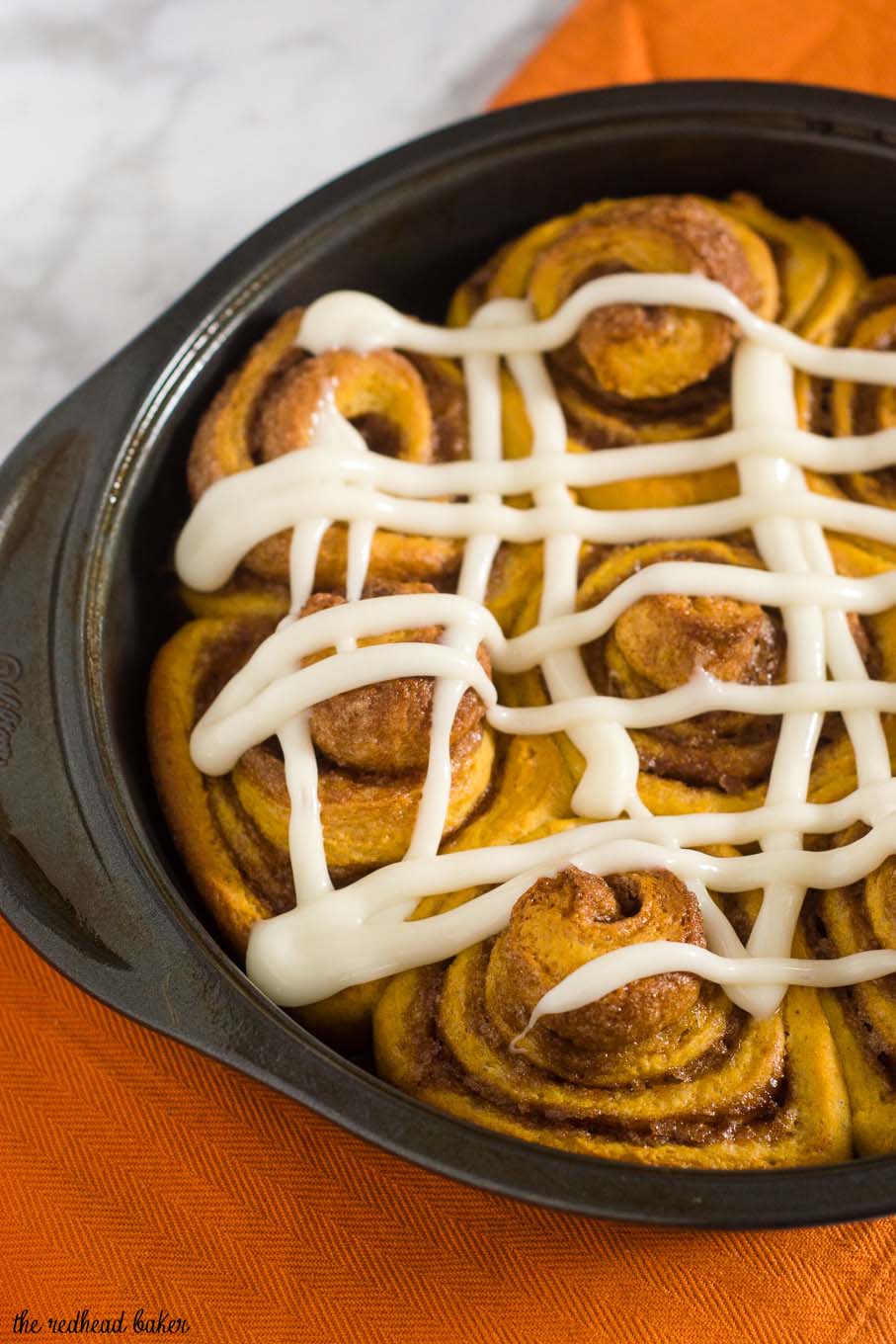