Pumpkin spice Rice Krispie Treats take on seasonal flavor with pumpkin puree, cinnamon, nutmeg, and cloves. Then they're finished with a drizzle of white chocolate.

Hello, Redhead Baker readers! I'm so sorry that the site was down all last week. I underestimated the difficulty of switching hosting sites. Oops...

Anyway, can you believe that tomorrow is nearly October?? I have at least two fun things planned on the blog in October, the first is coming up later this week. I hope you like bell peppers!

In the meantime, I have pumpkin on the brain, BIG TIME. There are 15 different brands of pumpkin beer in my refrigerator. Yes, 15. There were 16, but I drank one already. And there's still two or three more I want to buy.

I also still have yet to make my favorite fall soup, cream of pumpkin. And just about every recipe pinned on my All the Pumpkin Things! Pinterest board.

Well, every recipe except one — because I already made it. They announced a rather last-minute potluck at work, so I wanted something seasonal yet easy and approachable. As I was scrolling down the Pinterest board, I saw the Pumpkin Spice Rice Krispie Treats I had pinned  from The Comfort of Cooking. Familiar. Easy. Seasonal. Perfect!

They were a huge hit, I'm glad I made a double batch! It's like Rice Krispies wrapped in pumpkin pie flavor! 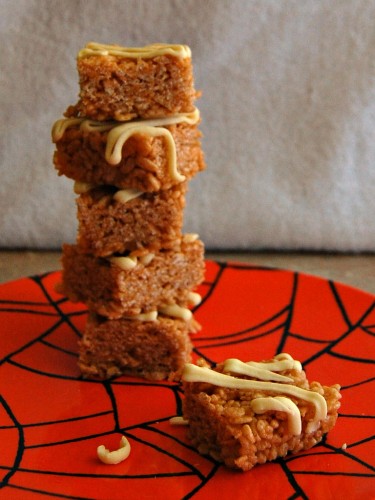 Recipe from The Comfort of Cooking