Raspberry lemon cupcakes are a delicious summer dessert. These fluffy cupcakes are filled with tart lemon curd and topped with silky buttercream flavored with raspberry puree. 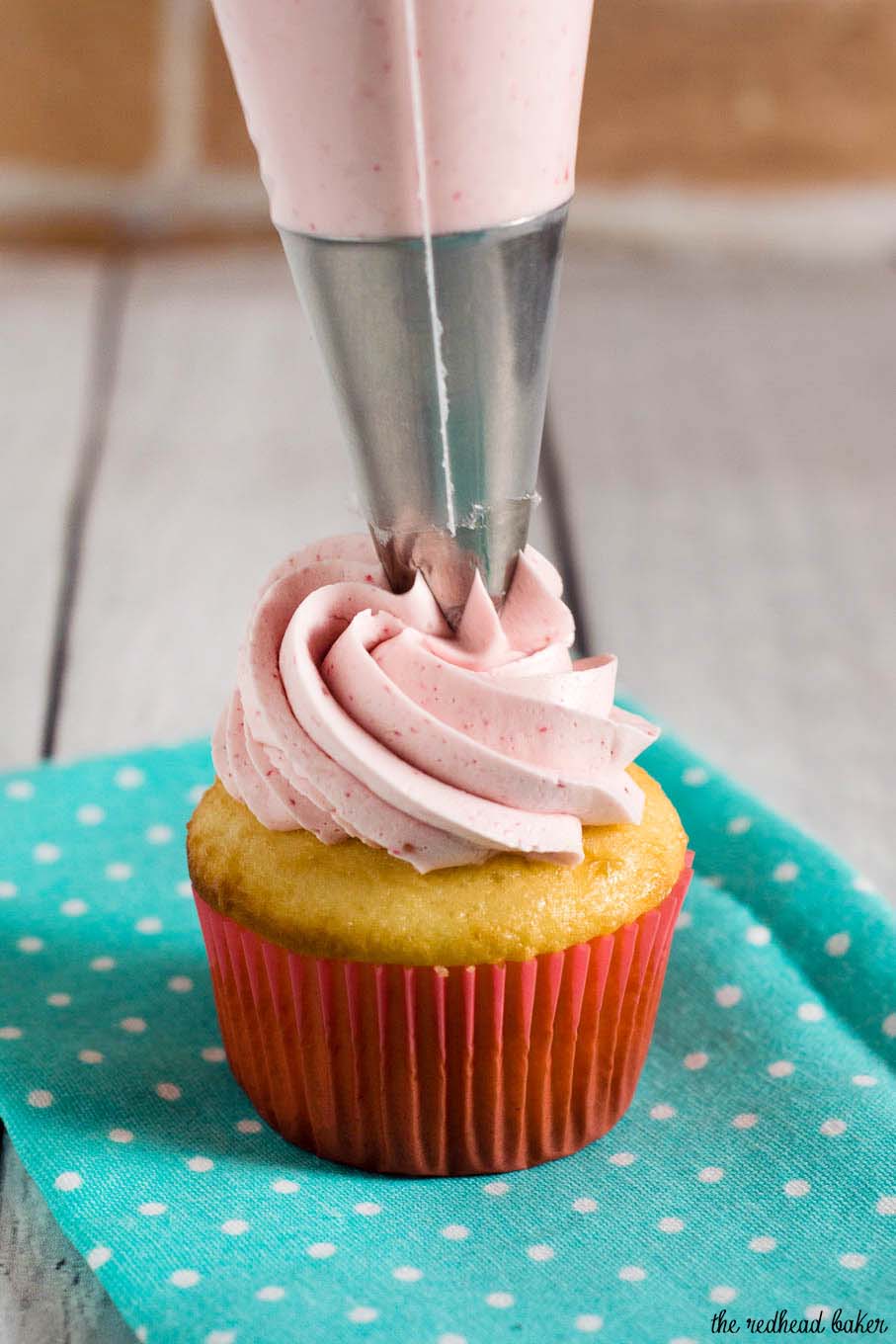 I can't do a whole Farmers Market Week blog event and not include a dessert post. Summer berries are the best, and they can be used in so many delicious ways, from mousse to frozen pops to pie.

I'm not even sure I've shared a fruit-flavored cupcake here on the blog yet. These fluffy vanilla cupcakes are filled with lemon curd and topped with my favorite buttercream flavored with raspberry puree. 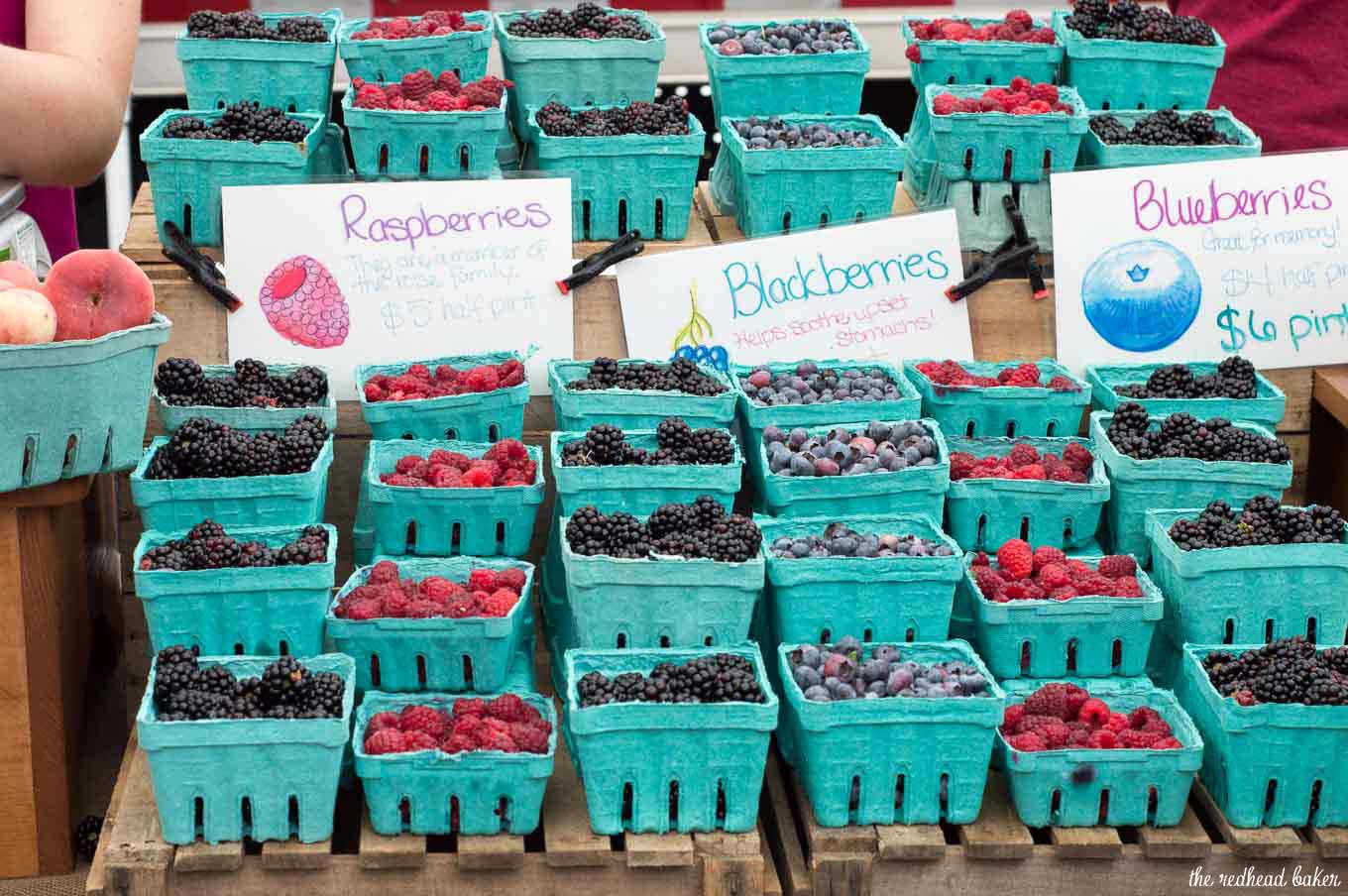 These fluffy cupcakes are the perfect balance of flavor and texture. I chose the recipe after reading a comparison of yellow cake recipes on Cookie Madness. The buttercream, oh the buttercream. Forget the cupcake, I could eat it straight from the bowl. It has silky texture, it's not too sweet, and not too buttery.

If making cupcakes plus buttercream plus raspberry puree PLUS lemon curd is too much, you could (A) make the curd and puree on Day 1, make the cupcakes and buttercream on Day 2; or (B) buy the curd instead (you'll need about 1 ½ cups to fill all of the cupcakes), or (C) add the zest of 1 lemon to the cupcake batter (cream it in with the butter, oil and remaining buttermilk) and skip the curd altogether, though it does add extra moisture to the cupcakes. 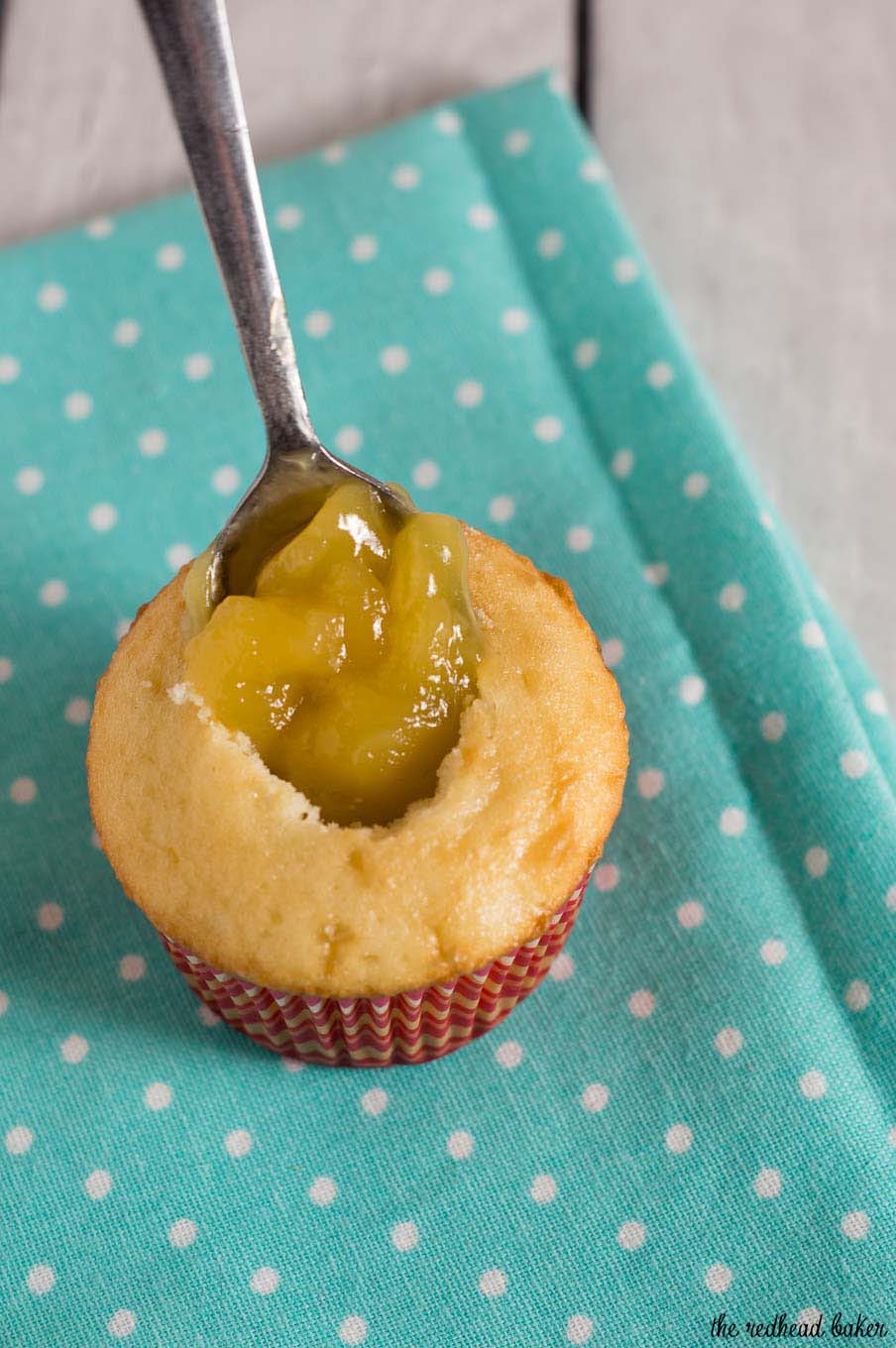 I highly recommend frosting the cupcakes the same day you make the buttercream, if only because it's a pain to warm the buttercream and re-whip it before using it. You can use a plain or star tip to pipe the frosting; it's really just personal preference. I used an Ateco #32 open star tip.

Frosted and filled cupcakes should be stored in the refrigerator. Let them stand at room temperature for 30 minutes before serving, to soften up the buttercream. Add a fresh raspberry and a small lemon wedge for garnish. 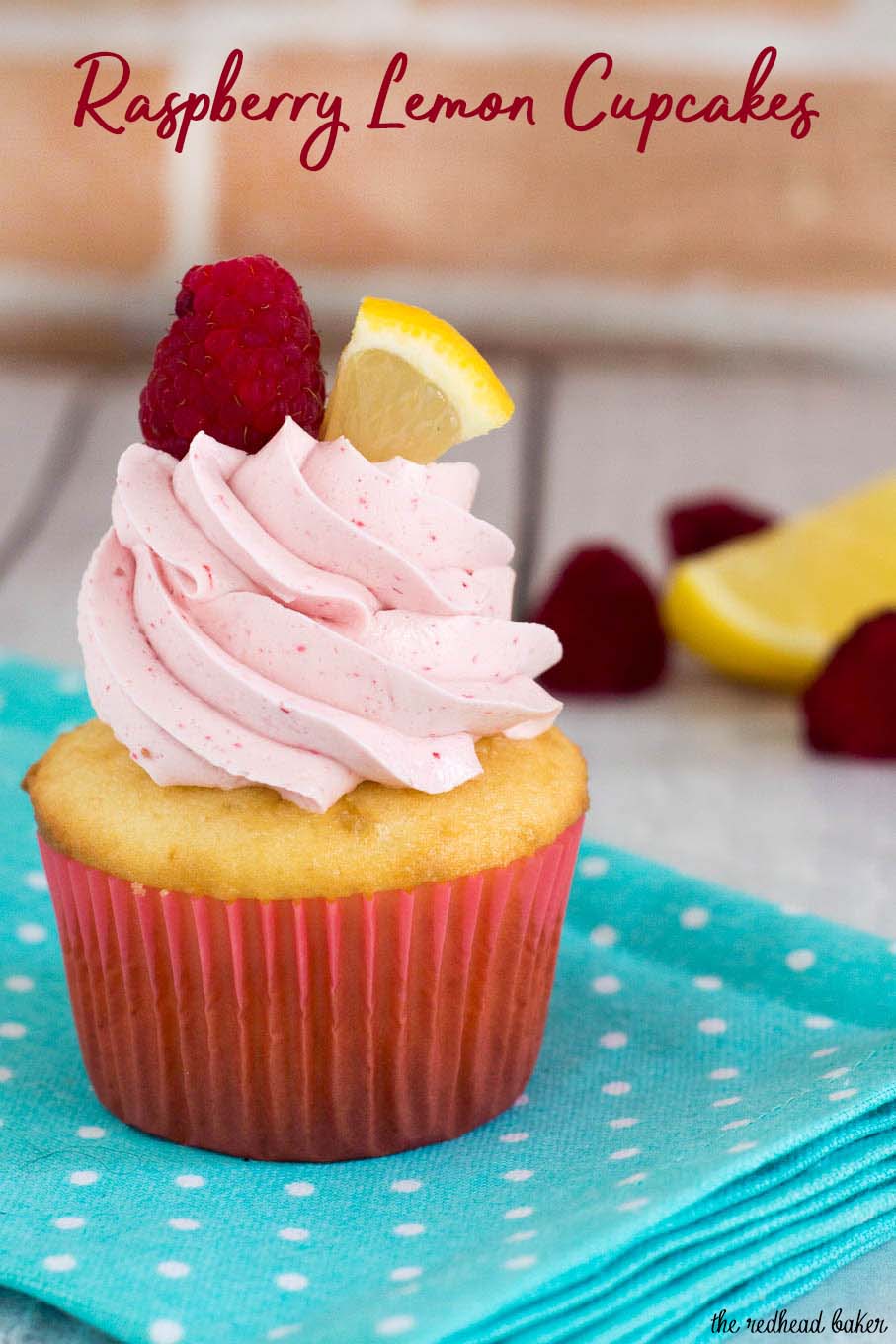 For the lemon curd filling:

For the raspberry puree:

For the lemon curd filling:

For the raspberry puree:

Cake recipe from Shirley Corriher, as seen on Piece of Cake 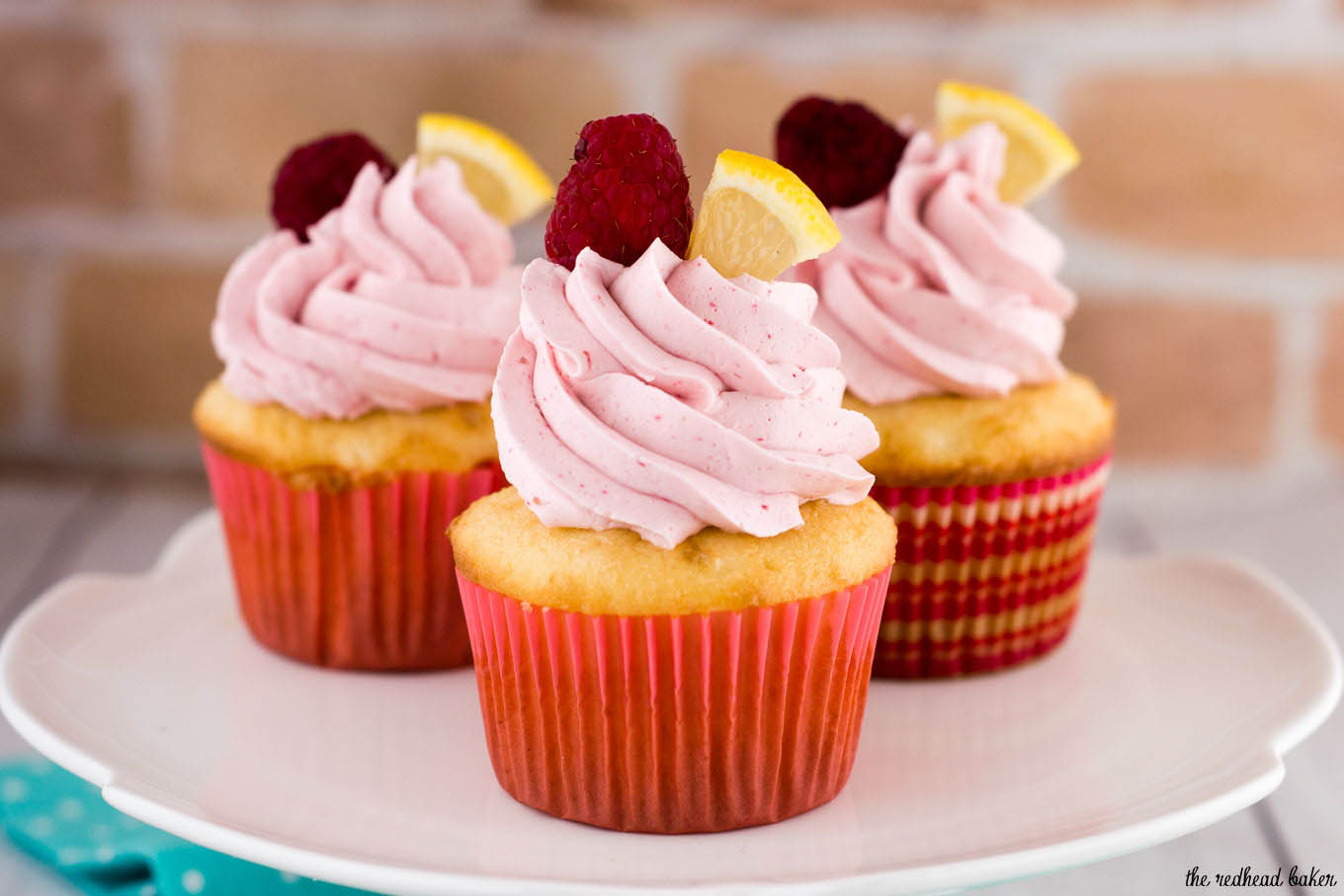