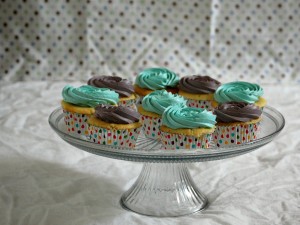 I spent a day or two, perusing cupcake recipes, looking for a "knock-their-socks-off" flavor combo to bring to a baby playdate. "Why?" you ask, "It's just a baby playdate." That's just how I am. I can't just bring a dessert. I have to bring the OMG-this-is-the-best-EVER dessert.

And sometimes, taking one "boring" flavor, and using great quality ingredients, turns it into an AMAZING flavor. 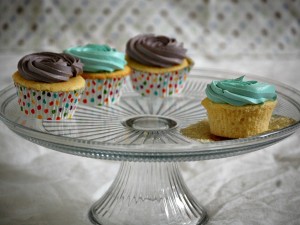 These cupcakes are light, fluffy and moist, flecked with the seeds of the vanilla bean. And I will admit, I've been somewhat of a buttercream snob. I couldn't stand "American" buttercream (butter and powdered sugar — I often found it gritty and way too sweet), and would always recommend Swiss Meringue instead. And while Swiss Meringue will always be my #1 frosting, this Quick Vanilla frosting is delicious. Not gritty, not overly sweet. When I'm rushed for time and don't want to put the effort into Swiss Meringue Buttercream, this frosting is a great backup.

Whipping the buttercream for three minutes at the end ensures an almost pure-white frosting, which takes color beautifully. Just be very judicious with the color. Start with a drop, mix until evenly distributed, then add more if needed. The very first time I tried to color frosting, I was going for pale pink. Added too much food color, and ended up with Barbie pink. You can always add more, but you can't remove it.

My final recommendation is, if you're making these to bring to a get-together, maybe leave one or two at home for yourself. Because after about five minutes, this will be all that's left. 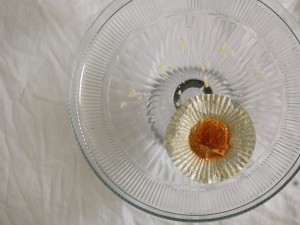 Summary: Vanilla beans add intense vanilla flavor to these cupcakes, don't leave them out, if at all possible! If you really can't swing the vanilla bean, double the amount of vanilla extract.