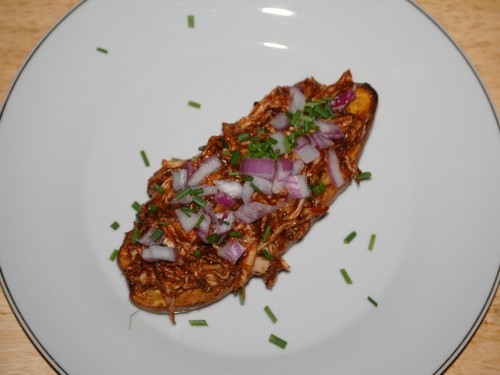 Pregnancy does weird things to a woman's body, in a number of ways. I mean, our internal organs get jostled and squished and pushed out of the way. Ever hear a pregnant woman claim she's starving, then she eats two bites and she's full? Yeah, that's why.

Yet, when the chicken is either shredded or ground, and mixed in with other ingredients, I don't notice it, and can eat it.

As I mentioned in a recent post, I saw a recipe on Confections of a Foodie Bride that I really wanted to try. Shawnda, the blogger, was on the Whole30 Diet, and adapted this recipe from one of the books about the diet.

I'm not following Whole30 myself, so I didn't make the sauce recipe that she lists in her post. I simply substituted my favorite bottled barbecue sauce from Trader Joe's.

The recipe is delicious, and very filling, thanks to the baked sweet potato. Sweet potatoes not your thing? Substitute a baked white potato instead.

Adapted from Confections of a Foodie Bride